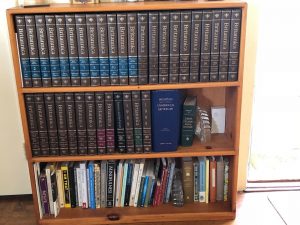 I was chatting with some friends about where we get our general knowledge from. One reminisced about the rows of hardback, dark blue covered books, called the “Encyclopedia Britannica”, her family had bought from a dodgy door-to-door salesman. Back then in the 60s and 70s, it was a status symbol among working and aspiring families to have bought the entire collection. She admitted hardly having read them but pointed out how they filled the bookshelves nicely. According to Wikipedia, it was the longest lasting printed tome, first published between 1768 and 1771 in Scotland. It kept growing in size with new volumes being added each year such that the 15th edition spanned a mighty 32 volumes, comprising 32,640 pages. 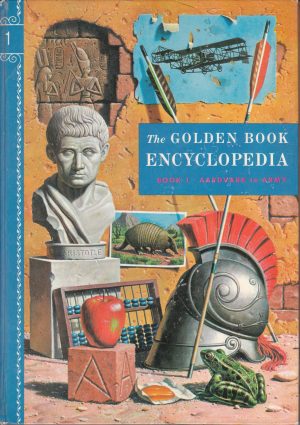 For some reason my family bookshelf did not possess a set. Instead, we had the slimmer ‘Golden Book Encyclopedia’ that was made up of 16 slender, hardback volumes. Each has its own distinct shiny colourful cover made up of a collage of enticing objects and targeted at the family rather than keeping up with the Jones. I would often take one or two off the shelves at a time and dip into them to learn and wonder; whether it was reading about the brain, seeing volcanoes spew forth or discovering strange animals existed like the aardvark. It was a joy on a Saturday afternoon to be lying on my bed absorbing this general knowledge while whetting my curiosity. The writing was accessible, the text illustrated with enticing figures and drawings. I was hooked on the multimedia of my day. I loved the feel, smell and weight of the books in my hand and occasionally liked to rest my chin on the top of an open one, that I balanced on my bed, as I daydreamed about mummies in Egypt or seeing lions in Africa.

Then  the Internet and Google arrived, transforming how people got their knowledge – free and instantly available. It was the end for printed versions of encyclopedias. Next, Wikipedia came into being at the turn of 2000. And that makes it 20 years today. Happy birthday! The online resource started off by being written by a few keen editors contributing articles about things they knew about which were then edited by others if they felt they needed to be corrected. Over the years the number of edits grew exponentially while the number of contributors levelled off and then declined considerably. There are now over 40 million accounts, suggesting a huge number of people worldwide have had a go at adding to this collective memory of knowledge. However, of those only 127,480 are actively editing today. 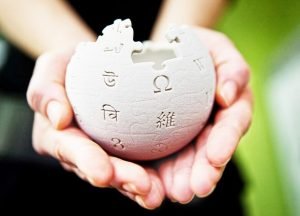 Then there were the infamous editing wars over the years where editors who disagreed about the content of a page repeatedly wrote over each other’s contributions, sometimes to the point of being quite vindictive – be it about politics, history or scandal. Someone, also thought it was a good idea to start contributing biographies for ‘known’ people – be they footballers, academics, actors, musicians and so on. As a result, it also became a Who’s Who. We all quickly discovered you can learn lots of interesting things about your colleagues – that you did not know otherwise – like what school they went to and how old they are.

But who has the time on their hands to do all of this? Especially, since it is not paid for. It seems the contributions are not evenly distributed. The person who has edited the most articles is Steven Pruitt who has made over three million edits! He has also created more than 35,000 articles. I wonder if he wrote or edited my entry. It now needs updating and I don’t think I should do it.