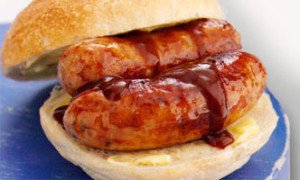 I’ve started listening to the Danny Baker show on Five Live that goes out on Saturday mornings. The delectable Danny explores everyday topics in his distinctive style; quirky, witty and maundering. You never know where a conversation with a caller might end. He has the knack of moving it in unpredictable and very funny ways. The pièce de résistance is the weekly Sausage Sandwich Game – that is now legendary amongst his fans. A guest (such as a former footballer, or a singer) is invited to answer questions about him or herself that are innocuous but personal – such as when did you last climb a tree (this year, in the last two years or over 10 years ago) or where did you live for the longest when you were a child – on a street, road, lane, close, avenue or other. The kind of unique questions that banks should come up with for their security questions instead of what is your mother’s maiden name or the primary school you went to (since now you can lift that information so easily from Facebook or LinkedIn).

Two call-in contestants are also invited to represent their football team (say Arsenal or Berwick Rangers) and have to guess what the guest would choose as their answer. They have to make their choice based on what they have heard about the guest in the introductory banter.

So, on very little information they have to decide, for example, if the person is a tree climber (and hence climbed up one recently) or even more random, they seem like a person who would have lived on a road rather than an avenue. Having tried to work it out and explain their reasoning the guest then reveals when, where or whatever the answer. Whoever gets the right answer scores a goal. The last question asked is the sausage question – do they take red sauce, brown sauce or no sauce when eating a sausage sarnie. The suspense is brilliantly timed. We hear the clock ticking and then the contestant’s think aloud reasoning behind their choice (e.g. ‘oh she is definitely a brown sauce person, given she is from up north’, or ‘he does not seem like someone who would take any sauce’ so a no-saucer). As Danny says, this question reveals something about a person in ways that an interrogation could never do. The bon homie and self-deprecating humour that exudes from Danny throughout keeps you laughing and looking forward to the next game the following week. It is masterful, phone-in radio.

We often have to guess something about someone else, their likes, dislikes, what presents they might like, writing something witty about them on a ‘miss you’ leaving card, which restaurant or café they would like to meet at, and so on. For many it can be hard work, especially if they don’t know the person that well. There is a mismatch between the individual things we know about a person and the high level categories offered by retail. Buy for him or her; that special present for mum or dad, and so on. What if you could go to an online site and instead answer a few sausage sandwich type questions about a person you need to buy a present for, say a 40th birthday. The underlying system could do some clever pattern matching and suggest something original and unexpected for that person. That would be smart shopping – and entertaining for the shopper instead of being a chore.