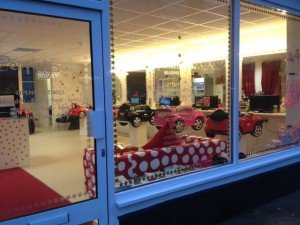 Post Christmas, in heavy rain, Hove’s Church Street was thronging with crowds of bargain hunters. It was not even 4.00p.m and yet darkness had descended; umbrellas pierced the downcast sky. In stark contrast, the shop fronts twinkled with Christmas lights and enticing goods beckoning people to go inside. Amongst the familiar stores, I noticed a bright new place, just opened, called Bertie and Belle. I looked in the window and saw a row of toy racing cars perched on pedestals facing a wall of mirrors and TV screens. I looked again and realized they were not for sale but were meant for kids to sit in and have their hair cut. Stenciled on the window were etched signs, ‘baby’s first haircut’, ‘super girlie candy nail bar’, where little girls will be in pampering heaven, pampered to perfection.

I was intrigued by this child’s LA paradise landing in deepest Hove and looked them up on the Web. On their home page they promise, “the ultimate destination for kid’s grooming, pampering, parties and shopping. From the first steps onto the Hollywood red carpet, up to the giant fish tank reception, Bertie & Belle will capture the minds and hearts of little people and adults alike.”

Trouble was there was not a tiny tot or mom in sight. Just the two owners looking wistfully, from behind the fish tank reception, outside at the rain. I felt sorry for them; clearly, they had invested a lot in their Hollywood-inspired enterprise, thinking it would tap into the Brighton scene.

I always thought that cutting your baby’s hair for the first time was one of those joyful moments parents could share. And painting nails bright purple or putting make-up on was something you did with mum, using her grown-up kit of lipstick, eye shadow and mascara. What has childhood come to when it is adult-accessorized – rather than only pretending to be doctors and nurses?

But it is not just make-up that is getting a make-over. Adult technology, too, has been turned into kiddie toys. Laptops, tablets and phones have been simplified and techno-coloured into kiddie versions. I was asked to write a report for Which magazine – which comes out next month – evaluating the various claims made by the toy companies about their lurid products, one being:

“Toy computers for kids have now been specially created with little children in mind. They have been made with sturdy plastics so that they are really durable and they have also been made with lots of bright colours and buttons to make them highly attractive to the users” 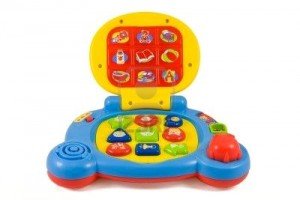 While indeed they are very bright, it seems they are missing a trick. Any parent who owns an iPad, iPod or iPhone, soon finds out how they become highly prized by their young ones; watching on as they learn with lightning speed how to interact with them, play games, scroll through photos, watch movies and listen to music. Savvy developers have also been quick to realize this; there are now countless apps that have been designed for kids that parents happily download for them – simply, they want the real thing. Kids have always liked nothing more than pretending to be grown-up, putting on daddy’s slippers or mummy’s shoes. The boundary between what is best to design for children or adults is increasingly blurred. But kiddy-fying adult products for commercial ends, when kids now feel more at home with the real grown-up ones, looks like becoming rapidly outmoded.

I wish Bertie and Belle a prosperous New Year.

(And it is now Sir Jonathan Ive)