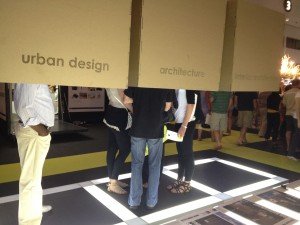 It has become increasingly popular for people to aspire to a new form of creativity that entails thinking ‘outside the box’. The idea is to think differently, unconventionally and blue-sky. The hope is that innovation and vision will come forth. Indeed, it is a phrase I sometimes resort to when explaining what I am trying to achieve on my dream fellowship. But it got me wondering, what is wrong with ‘inside the box’ thinking? What is the difference between inside and outside thinking? Is one more conformist and the other more free-spirited? And why should one way of thinking result in a more desired outcome than another? Maybe constraining one’s thinking can be just as good for the big picture as being let lose outside of the box.

Last week, whilst visiting the Indaba Expo in Cape Town, we spotted three large boxes suspended from the ceiling that an architectural company had placed, with only their name appearing on the brown cardboard. They afforded stepping inside; one’s gaze was immediately drawn to the headless people who were already standing inside them, making you wonder what they could see that you could not. The more you looked the more your curiosity was sparked. I waited patiently for a box to empty and then I stepped under to see what was hidden from the outsider’s view.

It was a very clever bit of marketing. Once inside the box the four sides immediately grabbed your attention, being so close. In my one, I found myself swivelling around and being face to face with images of buildings and people, promoting the firm’s work with examples of case studies. If you want people’s complete attention for a few minutes away from the competing crowd this is the way to do it.

The other night, I watched G and G’s kids horsing around inside a very large cardboard box, which their new stove had arrived in. They’d made a couple of eye slits in the side to see out from and opened up a seam at the back so it could easily be placed over their heads. Like the architectural firm, there is something delightful about restricting how one can see and move. The kids got enormous pleasure, giggling infectiously, not knowing quite where they were going as they propelled themselves box-bound through the garden.

Just as there is a desire to break free from routine and predictability in life – by stepping outside the box – there is, equally, pleasure and possibility for new thinking to be gained when stepping inside the box. The trick is to know how to do both, dovetailing between them, in order to see from above and below, inside and out, and within and beyond.

My PhD student, Stefan, just pointed me to this video by Joseph Pelling called ‘outside the box’ that won an award for best animation. It is very funny.

outside the box from joseph Pelling on Vimeo.