Why is there so much hype about the Metaverse these days?  It has even taken over from AI as the hottest tech topic. Last week when I asked Matthew Ball, the author of a forthcoming book about it, if I could take a peak inside he told me unfortunately no since the publishers want to keep it under wraps until it actually comes out in print. According to the blurb on Amazon’s site about the book, the Metaverse “is suddenly everywhere…It is a persistent, 3D, virtual world―a network of interconnected experiences and devices, tools and infrastructure, far beyond mere virtual reality. And it is poised to revolutionize every industry and function, from finance and healthcare to payments, consumer products, and even sex work. The internet will no longer be at arm’s length; instead, it will surround us, with our lives, labor, and leisure taking place inside the metaverse.”

That is hype to the max!

No wonder everyone is talking about it. Only today, I heard a radio show scaremongering the audience about all the potential dangers children face when entering the Metaverse – from being bullied to being groomed. However, just like AI, the idea of the Metaverse has actually been around for a while. Its earliest incarnation was in the form of virtual worlds, like Second Life, where people could create online spaces to socialize, learn, and hang out in. The virtual worlds were represented in 3D graphics which were navigated and experienced via a desktop. People could fly around and walk through walls to get from one place to another.  I remember on my first visit, ‘flying’ to a virtual lecture in a massive stadium that resembled the Coliseum in Rome. All rather strange and fun for a while but nothing to get really excited or worried about. So why now?

In the early 2020s, Mark Zuckerberg (Meta) took it upon himself to talk up the Metaverse as if it was the next big thing since sliced bread. One of his ambitions was to make the next generation of virtual worlds feel truly immersive. The step change from the older virtual worlds, like Second Life, was to radically change how people experience and interact in the Metaverse. Not through a desktop display, but by donning a VR headset and using the connected VR touch controllers to move their avatar’s arms around in the virtual world just like they do in physical world. This more extensive form of embodiment is what is envisioned will provide the compelling immersive experience. This image shows one version of Zuckerberg’s vision of the Metaverse. Three avatars are enjoying the outdoors, moving their arms and hands around, as if they are together, even though they are apart in the physical world. However, look closely and you notice something slightly odd about the avatars. They don’t have any legs! The reason for this it seems is largely down to technical limitations. In contrast to the VR controllers which can map onto arm and hand movements relatively well in real time, the sensors and controllers which are currently available that can be placed on someone’s legs, are not able to represent someone’s leg and feet movements in VR nearly as well. It is often the case that obstacles can get in the way (such as someone’s belly), resulting in movements of the legs being obscured and so not able to be detected accurately. Because of this, VR headsets like Oculus, were not designed to capture the whole body of a person. Time will tell whether these kinds of occlusion problems can be overcome. You never know, in the future, we might see people putting on a whole body suit (like a Spiderman outfit) rather than just a VR headset when entering the Metaverse.

Meanwhile Second Life  has become commercialized. People can go there to shop for clothes and gadgets. The first ever Meta fashion week took place in Second Life last month. Even though the model avatars are impressive in how they move they still seem to be floating in air rather than walking down the catwalk. After the show, skins of the outfits that were modelled on the virtual agents could be purchased with Non Fungible Tokens (NFTs). Once purchased, people could then dress up their own avatars and parade them in Second Life.

Instead of using human models some designers like Dolce & Gabbana decided to use cartoon cats to show off their skins. One of the reasons is they look cool. Another is they avoid the problems of trying to emulate a human model and so don’t have to worry about how lifelike the model avatars appear. And no cats are harmed in the process. It is fantasy world all over again! 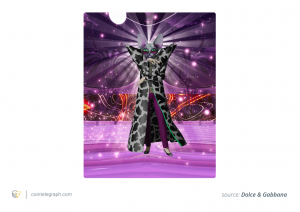