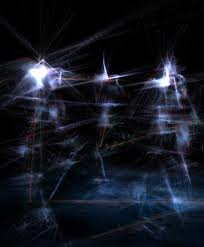 I remember buying my first 3D disposable camera in the mid 90s from a family-run store in Palo Alto and being wowed back then. Opening the wallet of my first 12 glistening prints, I was tickled by each one’s illusion of a 3D world, re-created on thick ribby paper. My snaps were of friends in tourist poses; standing in front of the Golden Gate Bridge, leaning on a big Cadillac, steaming in an outdoor hot tub, being dwarfed by giant cacti and being flashed by neon signs. The iconic images stood out boldly against the Californian-coloured backgrounds, like 3D models offering an imaginary, childlike depth of view. The hues were so vivid that the foreground objects seemed to pop up and out; nothing like the world we see through our own stereo eyes or when we interpret 3D from conventional 2D images. All very Wizard-of-Oz and dream-like.

In one of my earlier entries, Hyper 3D, I talked about how 3D technology capitalizes on hyper-reality. Balls, cars, arrows, and schools of fish come racing towards us and over our shoulders – making us feel the action as we slouch and flinch on our sofas. But as David Hockney wryly observes – in Gayford’s new book on conversations about his works – it’s just, too, toy-like: we don’t actually see or experience the world like that, ‘it is like someone is making a life-size replica of the world’.

So why not use the evocative power of 3D technology to do something different other than ‘out-real’ reality – depicting something that normally can’t be seen but only imagined? A mirror of the mind, perhaps, projecting hidden repressed emotions, memories and images? Last Friday, I saw an ingenious use of still 3D at Sadler’s Wells that tried to do just that – and it worked brilliantly. Wayne McGregor in collaboration with OpenEndedGroup (New York based, digital art collective) and composer Mark-Anthony Turnage put on the latter’s chamber opera “Twice Through the Heart” and added elements of still 3D, by projecting a tormented woman’s past, using two mega-screens that covered the front of the stage, out into the stalls and circle. The audience were given bright yellow plastic glasses to experience the effect. White membraned, 3D still images emerge like frost does when shown appearing on a glass window in slow motion. Behind the organic filaments sat a single mezzo-soprano – Sarah Connolly – alone at a bare kitchen-like table.

The story behind the opera is of a woman who has killed her husband, with a  knife, driven to such depths because of his constant abuse. Now, she finds herself doubly imprisoned; the memories of her nightmarish former domestic life, where her husband kept her captive, unleash and unwind within the solitary confines of her prison cell. She cannot escape – 3D images surround her and we the audience; a kitchen sink with grey blood-stained taps loom above both her and us, coated in milky, tissue-like film. Against this otherworldly digital backdrop, we see her physical body writhe and contort; her pained voice etching further the pathos. The illusion is of a tortured mind oozing out of human skin, creeping towards each audience member, almost within reaching touch – such is the clever use of still 3D digital technology.

Then suddenly, to coincide with a dramatic moment in the opera, the digital imagery vanishes. In an instant, we see only a stark image of Sarah Connolly, singing, standing and staring into an abyss.

The beauty of 3D digital photography is in its stillness rather than its motion; enveloping rather than engulfing our senses. And OpenEndedGroup has gone one step further; combining it with the physical world to unsettle and suggest. This creative use is leaps and bounds beyond the toy-like, fast moving (main)stream of objects that propel towards us on commercial 3D TV.