There are a myriad of apps available now that are designed to get you to take part and sustain interest in some form of physical exercise – be it walking, running, cycling, yoga, swimming or other.  Many have been around for a few years now and have had considerable success in motivating the masses. At the start of the New Year I succumbed to one, called Hadrian’s Wall Virtual Challenge, that caught my eye as it flashed through my Instagram feed, and before I knew it, I had signed up. I have been quite debilitated for the last few months, having been diagnosed with sciatica and some damaged discs in my back  – in part due to sitting badly, for months of hours on end in front of Zoom meetings. I am slowly on the mend and in need of an incentive and encouragement to get doing some exercise again. The Conquest challenges you to walk the 90 mile length of Hadrian’s Wall not literally but where you happen to be. I have always wanted to do that walk in the real, but with lockdown and bad back, it remains for the time being a pipe dream. So why not do it virtually? You walk the steps wherever you are and they get added to your total count. Simple idea but clever. 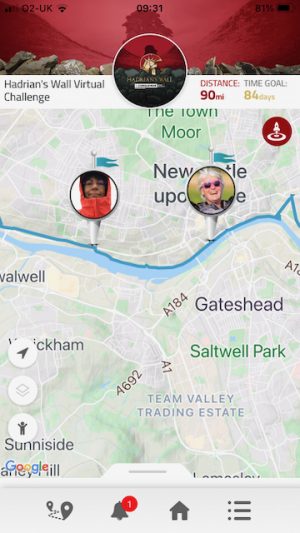 The app has been around for a few years now and has so many endorsements from people who have taken up the various challenges, it had to have been designed well. Indeed, it has the right wow factor, and good use of behavioural  change mechanisms in place; rewards when you reach certain stages; compelling and simple visual feedback on a map that charts your progress against others; employs a social good factor; has some personalisation, and promotes peer support. The interface is also intuitive to use although the navigation is a bit fiddly at times. It also automatically downloads your steps (once you work it out, so even walking round the house adds to your total). You find yourself of an evening looking to see where you are on the virtual map and how far you have gone that day and how far to the next stage. It is quite compelling.

I asked a couple of my friends to join me on the Conquest and we paid our dues and got set up and set off. We created our own community so only our icons appeared on the route on the virtual map. There are thousands of people from all over the world doing any one of the challenges each day so you don’t want to be crowded out by lots of stranger icons. I uploaded an orange cagoule-hooded image of myself and it magically appeared on the map.

I set myself 12 weeks to complete the walk – having only just begun to walk again. My friends popped up soon on the route just behind me (you can see one of them on the screen shot). Then they got neck and neck. Two days later they were both racing ahead, fighting it out to the end, with me lagging behind. It was a bit of healthy competitiveness, pushing all of us to exercise that bit more each day. I came third but well within the time I set. By the end I was averaging 6-7,000 steps a day – which for me was a major achievement. 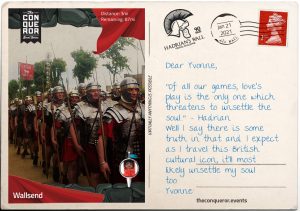 During the Challenge we received various messages charting our achievements. We also each planted 4 trees along the way as part of the Eden Project – that gives you a feel good factor. The strangest part of these ‘add-ons’ was every now and again being sent a virtual postcard, handwritten by yourself to yourself, about what you had seen and learnt. It reminded me of when I was a young child I wrote to myself a postcard from the Victory ship my family were visiting on a day trip to Southhampton. I did not know what to say to myself other than something inane ending up with ‘wish you were here’.  There is something weird about writing to your other self. And my handwriting was dreadful then – at least it has improved since then. 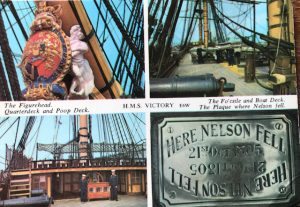 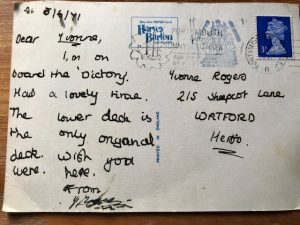 After completing the Hadrian’s Wall,  we hastily joined another virtual challenge to keep us going. This time we decided to climb Mount Everest. However, it did not feel right as it only counted your steps and not the height of your steps. Pity, as we would have had to have all been running furiously upstairs for the next few months to reach the lofty height of 8,849 m rather than the 39.9 miles we clocked. 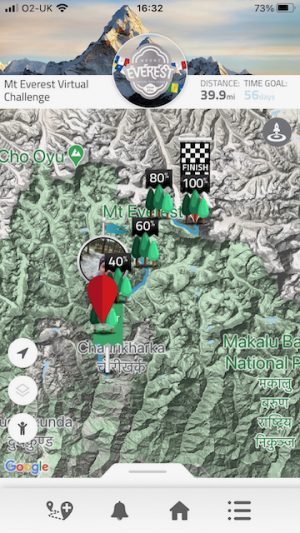 I was surprised by how much I have enjoyed the Conquests. Not least, keeping in touch with some friends in a lighthearted and lightweight, but competitive way – while personally upping my game and helping me to get fit again. When you complete each one you have the option of being sent, in the post, a chunky physical medal with a fat ribbon to wear round your neck. The girl below is showing hers off on Facebook, having just completed the Land’s End Challenge, which is a whopping 1,743 km. No wonder she has such a big smile. I wonder what our next Conquest will be? 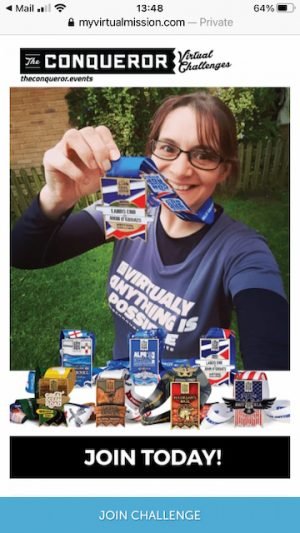