Much has been written about the power of a label to make the object it is attached to stand out. Popular techniques used include striking images, bright colours, ironic slogans and unusual designs. The trick is to make the label grab someone’s attention – be it online, in a store or in a catalogue. The competition for customer’s eyeballs is particularly marked for wine where there are thousands of brands vying for their attention.

On a recent trip to Western Australia, I visited Tylers, a small family-run vineyard who market their wine through a fun form of ‘selfie-labelling’. Visitors can pose for a photo which is then made into a label that can be stuck onto a bottle of wine they have purchased – transforming it into their very own personalized wine. All for no extra cost. 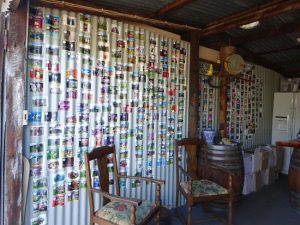 The vineyard was very low key, comprising a small farm shack where the tastings took place; the inside and outside of which were covered from top to bottom in previous visitors’ wine labels. Located in one corner of the shack was a dusty old PC, that was used to design the labels and a printer that kept getting jammed. It felt like stepping back in time to the halcyon 80s computing days. Some of my colleagues, who I was with on the wine tour, immediately saw how they could improve the tech. But for me, I thought its ‘old fustiness’ simply added to the place’s nostalgic charm.

Another recent innovation – also from Australia – has been to use augmented reality (AR) to make printed historical characters appearing on the wine label come alive – as if they were actually talking to you. The brand ‘19 Crimes’ has stolen the market on this; presenting a line-up of british convicts who were sent to Australia back in the 18th Century, and who regale their stories for why they were incarcerated and how they then subsequently became colonists. The AR characters celebrate the rebellious spirit of the exiled men and women who then went onto forge the national spirit in Australia. It is intriguing and atmospheric listening to their stories . Rather than using AR as part of a game, such as Pokeman Go does, it has been used in an adult context, bringing the story behind the wine label alive in a playful, mysterious and slightly uncanny way.

Placing labels on people, however, has a very different impact. The compulsory yellow badges that were required to be worn by Jewish people during the Nazi era were intended to stigmatize, humiliate, segregate and control them. Quite abominable. Nowadays, labels in the form of badges are used to signal implicit messages to the general public, asking for understanding and acts of kindness 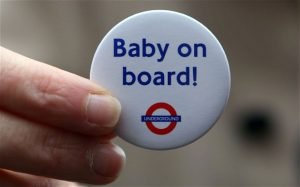 – for example, politely requesting someone give up their seat on the London Underground if they see a woman wearing a badge saying ‘baby on board’.

In Japan, a label has even been created for female staff to be worn when working in a store to indicate to other staff they are menstruating. The badge is adorned with a cartoon character called Miss Period. The underlying message is intended to enable other staff to feel OK helping the wearer and for the wearer to be excused if they feel the need to have a longer break. 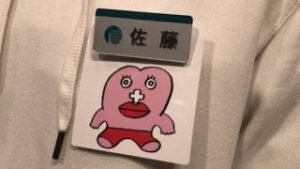 To many outside of Japan, it may seem somewhat strange and a little demeaning, to see someone wearing a Miss Period badge.

For shoppers not in the know, it might be read as saying, ‘I am having my period now’. But what is the customer to do? Should they avoid the sales assistant? Say something to them or other? Without any guidance, it can be awkward for the general public to know what to do or say on seeing such a badge being worn. In this context, the image is clear and rather cartoon-like, but the message less so, resulting in both the wearer and the observer feeling uncomfortable.

Another form of product labelling is one that informs consumers about something. One such initiative that is doing the rounds again is called PACE – which stands for ‘Physical Activity Calorie Equivalent or Expenditure’. The underlying rationale is that a label is placed on food or drink packaging to specify how much exercise would be needed to burn off the calories, if it was consumed – for example when eating a burger or drinking a can of coke. Some people may take the number literally and spend 40 minutes on a treadmill to earn their drink. Others might think twice about having extra fries or a muffin, when reading how much exercise is needed to burn it off. It might just nudge them to refrain. 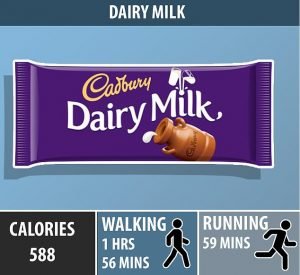 An ongoing debate is whether this kind of information is more effective at making people change their behaviour than simply stating the number of calories. Does a calorific number (e.g. 600) or a type of activity (e.g. a 40 minute run) increase the likelihood of taking more exercise and or eating less? A recent study by the University of Loughborough has suggested that people selected about 65 calories less per meal when their food was labelled using the Pace system. That is nearly a whopping saving of 200 calories a day. It is not clear, however, whether its impact also increased their physical activity in the manner subscribed.

I also wonder if it might make people think that as I have saved on eating less during the day by having an apple rather than a chocolate bar, I have earned myself an extra glass of wine in the evening. When it comes to Christmas dinners, I can’t see many saying no to a second helping of  homemade trifle and then hoofing it down the park for a 2 hour run.