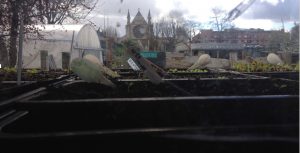 One of my PhD students has been investigating how environmental sensors can be situated in community gardens to provide new data about light levels. The motivation stems from wanting to help the volunteers who work in these gardens decide what to plant and where best to plant new crops. The data can be digitally visualised for them on a display to provide new information about the patterns of shade and bright sunlight over time. Information they don’t currently have access to. Instead they rely on previous knowledge and experiences of what worked and what didn’t do so well. The aim is to augment people’s existing knowledge with new contextual information, especially where it can be difficult to predict how different areas of a garden changes due to seasonal shifts in light and variable plant growth.

However, the initial reaction from the community gardeners was one of scepticism. They did not want to have ‘computers’ in the garden because that is where they come to get away from the digital world. Instead they value the experience of being in the garden and the importance of ‘getting their hands in the dirt’.

But later, when shown the sensed light levels in different parts of the garden over time, using augmented reality, their initial resistance was replaced with a degree of curiosity. They could see the potential benefit of having such light data to hand that could be overlaid on their schematic sketches and maps of the garden when planning in the potting shed. What they were clear about was not wanting an app that gave them advice  about what to do in the garden.

Meanwhile in India, Microsoft in conjunction with the Andhra Pradesh government have been using AI and machine learning to help local farmers determine when best to sow their seeds for groundnut, rice, maize, cotton and the like. Using 40 years of past data for weather patterns and soil conditions, they have been able to develop a predictive model of the likelihood of rain, drought and even pest attacks. From their models, they can determine when the best time is to sow seeds in a given region so as to optimise yield and reduce risk of failure. 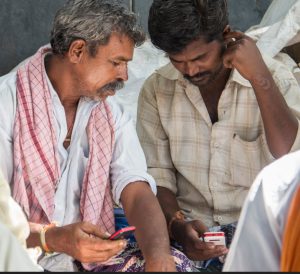 The really cool part of the project though is how the new knowledge is delivered to the farmers. Not via a smartphone app but by Microsoft letting the farmers know simply through sending them a text message – in their native language – to their feature phones.  And for those who can’t read they  leave a voice message. Gut feeling, experience and human wisdom are being replaced by straight forward messages – based on a remarkable combination of weather forecasting, satellite images, machine learning and cloud services. And what’s more, the farmers don’t need to have any sensors installed in their fields.

Who wouldn’t want to take heed from free advice coming from the cloud that is better informed and has a better chance of increasing their income? This seems like a win-win situation for all concerned. Local farmers benefit without having to compromise or change their practice. Scientists get to demonstrate a real impact of AI through increasing the income of people living in developing countries – without replacing them with robots or pushing ads down their phones. And Microsoft can bask in a feel-good factor for providing the infrastructure and wherewithal. 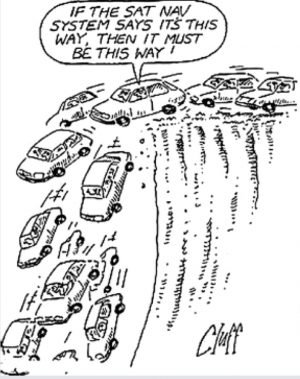 But what happens if the advice given is wrong?  And the farmers end up planting too early or too late resulting in a poor crop yield. Do they simply shrug their shoulders and think, oh well even AI can get it wrong. Do they continue to follow the text advice, next time – just like many people now have taken to blindly following their GPS when driving – sometimes against their better judgement. Or will they abandon the advice, revert to their gut instinct and decide once more for themselves? I supect we are in the midst of a quiet revolution in rural farming and there is no looking back. The AI will keep improving, too. But then again, global warming is also in our midst. And that is unpredictable.