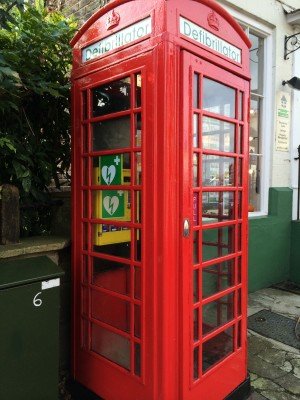 Defibrillators (AEDs) are located on walls in public buildings, stations, trains and planes. You never really notice them unless called into action – just like all the other safety equipment that is required in public places, such as fire alarms, fire hoses and extinguishers.

Last week we were ambling though the quiet village of Steyning, doing a spot of window shopping, when we came across an AED in a disused phone box. At first sight, I thought it was bizarre to see a life saving contraption where a public phone used to be but then it made perfect sense for it to be there, since no one uses public phones anymore. Rather than sell them off to Americans who place them in their restaurants, bars and homes for show and effect – why not keep them as a permanent feature of the British landscape, but repurposed to be live savers? Maybe it will stop the phone boxes smelling of urine and being vandalized. And help save a live. 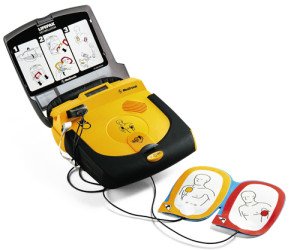 Defibrillators are strange machines that are intended to issue jolting electric shocks to someone who has just had a heart attack. They come encased in plastic boxes, usually coloured bright yellow or green. When opened up, they provide step-by-step instructions, with voice prompts, designed to be used by untrained bystanders. The boxes include a kit with all the things you will need to use the defibrillator. You are meant to start by ripping open the person’s clothing to expose their chest, then, if it is dry, wet it followed by applying two sticky pads with electrodes in them – one on the heart and one above the nipple on the right chest. If the person has a lot of chest hair it is suggested you trim it using a razor that is included in the kit. And if they are wearing an underwire bra you are meant to cut it away to avoid burns on the patient’s skin.

All of these preliminary actions are very intimate to be doing to a stranger. There is no dignity when it comes to having a heart attack. The AED machine will analyse the patient’s heart beat and then tell you to stand clear of the patient so it can deliver a shock if it considers it necessary. It will repeat these steps until the patient is revived or continues not to respond to the treatment.

Last week, one of my students witnessed a passenger using an AED, whilst on a tube train, on another passenger who had slumped unconscious. The person did not respond and was eventually taken away by the emergency service who came to the scene, assumed dead. She found it very distressing to be stuck in a carriage, having to watch the defibrillator machine repeatedly being used, in vain. I had a similar experience, about 10 years ago, on a flight to Seattle when a man crashed to the floor, face first, right next to my aisle seat. Two doctors rushed to the scene, when a message was sent out on the tannoy system, alongside two undercover air marshalls. They turned the man over and started the process under my nose. They began by opening up his Hawaii shirt (I can remember the detail of the pattern) and quickly strapping on the defibrillator. Then for the next hour, the defibrillator took over control issuing orders; which the doctors and air marshalls obediently followed. It was clear to everyone around him that he was dead but it is a requirement by law to continue trying to revive the patient until the plane has landed. The plane eventually made an emergency landing where he was taken off the plane on a gurney.

It is very disturbing seeing someone, unexpectedly and suddenly, die in front of you in a public place; a living body suddenly becoming lifeless, and then stripped and strapped to a pulsating AED. What has stayed with me most is the eerie robotic voice that repeatedly barks the same piercing dictum throughout the ordeal, just before it is about to deliver a shock, “Stand clear. Do not touch the patient. Stand clear.”

A couple of years ago a guy called Shay Carmon developed a concept defibrillator toaster that would revive your bread. That is black humour to the max.