Football has started again in Germany played in front of empty stadiums. It must be so weird for the teams to play without the roar of the crowd cheering them on. Normally, the chanting, banter and singing can lift and energise players to new levels. Now with the social distancing rules in place, when they score a goal there are no physical celebrations or embracing of other players. Instead, a punch in mid-air or a tap on the elbow. Not quite the same sense of euphoria or release.  The lack of atmosphere means there is no home advantage. Many players  approach the game more like a practice one. Show-boating and waving at the crowds also gone. It is no longer the beautiful game. 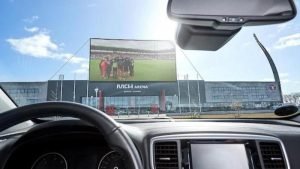 Same is true for other spectator sports and the Arts, from horse racing to concert-players. No audience physically present and no atmosphere to speak of. How can the performers find other ways to reach out to their fans and the fans connect back with them? Some venues have been thinking about how to bring real people back in their own car bubbles. A number of drive-in outdoor events are being experimented with. The Danish football side FC Midtylland, for example, plan to set up two massive screens in their large car park – that has 1000s of spaces – so that fans can rock up into a socially distanced space and tune into the commentary through their car radio. Instead of drive-in cinema it is drive-in footie. Maybe it will raise the noise level, as they hoot their horns when a goal is scored, but will it create the desired atmosphere for fans and players, alike? The football club have thought about this, too, and will show live footage of the fans parked up cheering in their cars from the car park inside the venue so at least the players can ‘see’ and ‘hear’ the crowd – albeit in their cars.

It might work – certainly better than the cardboard cut-out solution that some stadiums are using with canned cheering and crowd noises being emitted from loud speakers. I wonder how the graphic designer chose which people to use and how to place them at this match – to be representative of the fan base but also a chance for loyal season ticket holders to send in their choice of image to adorn their designated seat. Other plans are afoot for socially distanced drive-in raves and concerts. The mind boggles at the thought of 1000s of cars bouncing up and down as the owners ‘body’ dance while sat in their car seats.

All of these attempts to create some kind of connection, however, are a far cry from the real thing. Maybe, they will become the new normal for a while and morph into something that is still socially distanced but more socially connected. For example, they could evolve into a form of tailgating parties that are so central to US football culture – where fans rock up hours before the game to drink beer and cook on barbecues in car parks and open spaces near the stadiums. However, switching to drive-ins requires turning our cars into entertainment hubs – which obviously SUVs, 4x4s and pick-up trucks are best suited for. Trouble is society is trying to wean people off these gas guzzlers and get them to switch to compact electric cars. Seems counter-productive to saving the planet. There is also the problem that most cities don’t have the parking lots or spaces to support large-scale drive-ins. And then there is the added problem of managing toilet facilities but maybe someone will invent a portable toilet that disinfects itself after each use.

The strangest of drive-ins that have appeared are ‘drive-thru’ churches that pop up and where an outdoor mass is literally held in the carpark. It looks a sorry sight – no communal sharing of the bread and wine. Just the lone preacher necking the wine down himself while talking to a bunch of dark-windowed SUVs. That might be taking the biscuit somewhat.

Another way of connecting fans with players is to keep it digital. Streaming video games have been around for a while, where millions of spectators around the world watch top ‘streamers’ perform. They are provided with all sorts of extras that enables the fans to discover more about the player – not least their emotions and fluctuating heart rate and skin conductance at different stages of the game. This additional layer of data has been found to enhance the spectator experience and improve the connection between the streamer and spectators. But then we would return to being couch potatoes. Personally, I can’t wait to be part of a physical audience again, be it at a football ground, an outdoor venue or a theatre. 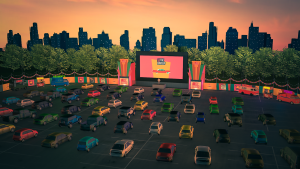 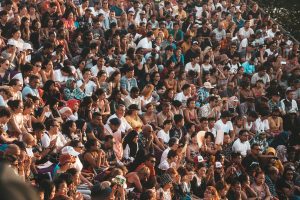 Thanks to Daria Lisotsova on unsplash.com