Many of my friends have taken to gardening during lockdown, making raised beds and planting whatever seeds they can get their hands on. Just like the craze for baking and bread-making, there is now one for growing your own food. The other day, my neighbour, Julie, proudly listed the latest seeds she has pricked and planted in our new communal street garden, including peas, potatoes, runner beans, borlotti beans, spinach, garlic, carrots and beetroot. We can all take it in turns to go and help nurture them, weeding, watering or adding more plants, although one neighbour is definitely the head gardener. 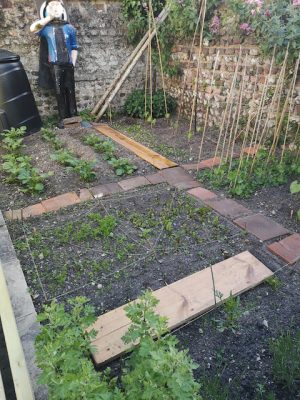 It got me thinking how could we could capitalize on these enterprising green finger efforts to make them even more of a shared event, where potentially hundreds or thousands of people could take part to grow one mega veggie patch or a series of connected gardens. Wouldn’t it be amazing if those who don’t have a garden could feel as connected to the earth as those who have actual gardens? As I wondered about this possibility, I was reminded of a project from many years ago when the internet was just getting off the ground called Telegarden. Anyone could log on to the site where you could watch a circular garden with a robot arm. You could also sign up to control the robot who would plant flowers and then water them. It was created by artists Ken Goldberg and Joseph Santarromana from California. It was kept alive for 9 years and during that time 10,000’s people connected. It was a fusion of tech and nature. The idea that a physical garden could be operated by users online was considered by the artists as being “the most absurd”. Now, in lockdown it does not seem quite as absurd.

How about we try to recreate a more up-to-date version of Telegarden (call it Lockdown Garden) in empty school yards, university campuses, national parks, meadows, or even on the land that people own but don’t have a use for. School children, grandparents, single people, young and old people, bored people, well anyone really, could log on, pay a small fee and select from a catalogue of fruit and veg seeds to grow. Drones and automated robots could work in tandem nurturing the garden, weeding and picking the veggies, that could then be donated to people in need. Our favourite TV gardening presenters, like Carol Klein and Monty Don in the UK, could judge the best kept Lockdown gardens and the most crazy, beautiful, bountiful and so on. And of course there could be disasters filmed by the drones that could keep the viewers and growers hooked, like the robots overwatering, marrows growing to be the size of a small car, and robots refusing to cooperate. Perhaps I am getting a bit carried away here but it would be a fun challenge for all those makers and engineering students who are now at a loose end.