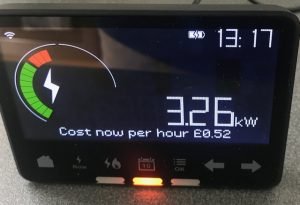 The day before the coronavirus lockdown started in the UK, I had a smart meter fitted in my house. After the engineer had finished, he walked me through all the various functions shown on the digital display; a dashboard of numbers provides all sorts of stats and data about how much electricity and gas you are using and how much they cost per hour, alongside an easy to read traffic light barometer that moves into red bars (see above) if you are using a lot of energy (e.g when boiling a kettle) while rewarding you with green bars when you are being energy efficient. The idea is that you use the various number and bars to change your behaviour and in doing so reduce your energy usage and save money.

I looked at the display a few times but did nothing to change my behaviour to be more energy efficient. Quite the opposite in fact; I started using more electricity and gas, making more cups of tea, cooking more meals, spending more hours in front of my laptop, TV and doing more washing – as a result of being stuck at home 24/7 now. Best place for the display was to hide it in a drawer. 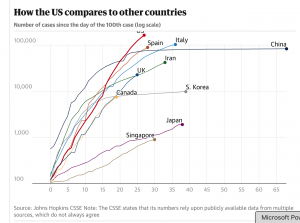 Meanwhile, like everyone else I have been gripped by numbers that are being delivered each day about coronavirus – but uncomfortably so. The number of new cases and the number of new deaths are on the rise each day. At first 2-3 people dying was considered shocking. Now we are up to nearly a 1000 a day in the UK. It is no longer shocking but expected. We have all become engrossed by the graphs the scientists generate each day to help the lay person understand what the numbers mean with respect to where we are in the quest to flatten the curve’. They project how steep the curve is each day relative to day zero. The colour coded ones show where the UK is relative to other countries we might care about. I catch myself comparing how we are doing against the US or Italy – thinking we are better off or not doing as bad. Why are we being shown this as if it was a competition? To make us feel better? Comparative graphs are a mechanism that is commonly used in behavioural change; known as social norms. By seeing how well you are doing relative to others (it could be a peer, a family, a neighbouring city or a country) you can feel good if you are below the others or worry if you are above – as it indicates loud and clear you are using more or spending more (conversely, if it is exercise, the reverse is true). 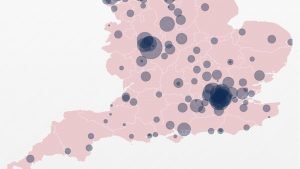 There are more and more of these visualizations appearing now, such as Sky’s: “Coronavirus: How many people have died in your area? COVID-19 deaths in England mapped”. Those who live in remote areas, like Suffolk can sigh a big relief that there are no big blobs near them. Those who live in London or other densely populated areas will notice  big blobs splatted over where they live. No wonder so many Londoners flocked to the countryside when they could. That is, before those who live there told them where to go.

For the most part there is little we can do other than worry when looking at these comparative coronavirus graphs. They are fodder, too, for the media and politicians. For example the headline on one news website: “Singapore Wins Praise For Its COVID-19 Strategy. The U.S. Does Not”

Today’s headline on CNN’s website was more in tune with the way science happens; through competing predictions and hypotheses: “New US model predicts much higher Covid-19 death toll in UK. But British Scientists are Skeptical.” The US team predict nearly 70,000 will die in the UK. The British scientists, on the other hand, predicted only 20,000-30,000 would die in the UK, based on their brand of mathematical modeling. Who do we believe?

One of the UK scientists involved, who has become a household name, is Professor Neil Ferguson from Imperial College. The UK government has increasingly relied not only on his team’s modelling prowess but also on their wisdom to decide on its next response strategy during the pandemic. It is an unenviable position to be in, as we scientists are not renowned for having the superpowers necessary to enable us to see into the future. Who knows what people will do and what will become of us when making such hugely impactful choices on how to manage the pandemic.

It goes without saying that mathematical models need lots of data in order to make accurate predictions. When predicting the weather, a tsunami or an earthquake millions of data points  are used. The current pandemic, however, in comparison, has relatively few data points that can be used.

It would be hubris not to remember the failure of Google’s Flu Trends program, a few years back, when it’s developers claimed, based on analyzing people’s search terms for flu, they could produce accurate estimates of flu prevalence two weeks earlier than official data. Sadly, it failed to do this for the peak of the 2013 flu season. Then, they had access to big data – masses of it. The current modelers only have access to small data – very little of it. Let’s hope all the lockdown restrictions imposed on society at large, that have been put in place in nearly every country in an attempt to stem the rise in the pandemic, based on current predictions and remote numbers, fares better. We can but hope.