So official lockdown kicked in on Monday for us living in Britain. The rules are a bit more lenient than in some countries, where they have draconian curfew measures in place. Here, we are allowed to leave home for one exercise a day, and to go shopping to buy necessary food and medicine. We are also allowed to go to work if we absolutely can’t work from home. So for the time being if you are a construction worker you can carry on as normal – so long as you are two metres apart. Good time to be a crane operator – high in the sky looking down on empty streets. I suspect not for long. It must be very difficult for a government to balance its country’s economy when deciding which strategies to use try to flattern the pandemic curve that will have most effect – while determining how best to change human behaviour in a way that is so very different from how people normally live their lives. 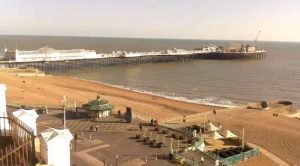 Yesterday, I did my beach walk alone at 8.00 a.m to start the day. It was full of joggers and dog walkers. There was plenty of space so we managed to keep our distance. The sea looked calm and serene and for that hour one could think of something else other than Coronavirus. Today, I am saving up my permitted outside exercise for later in the day. By mid-afternoon yesterday I was getting quite restless. At one point I looked at my watch thinking it was 4.15p.m – soon time for a planned social chat with a friend – only to then discover it was actually 3.15p.m. Normally, being surprised by finding I have an extra hour would be a joy. I can fill it in easily by catching up on work. Yesterday, I can honestly say my heart sank a little, reminding me of when I was a teenager on a long Sunday when the clock stands still…

Meanwhile, all around us is a flurry of activity online. I see a lovely Amanda is streaming her yoga class to us on Friday at work. A couple just got married in Birmingham before the country banned weddings; over 100 guests watched it being live streamed on Facebook. There are also sweet videos of grandchildren, now doing the rounds, waving at their grandparents through the windows or patio doors in their garden, some even squashing their little noses up to the glass. Lots of people have celebrated their birthdays with their friends family and by virtually holding their birthday cakes up for them to see.

The one that has caught everyone’s eyes, however, is Joe Wicks, also from Birmingham, who has become the self-proclaimed UK’s living room PE teacher. Hundreds of thousands of families are joining in each day for his 9.00a.m class. You can see why. He has charisma, presence, energy and drive that appeal to children and parents, alike. The videos of kids prancing around the living room, following his instructions, are very moving. A bit of the magic that Russell Brand oozes seems to have rubbed off on him.

Eating alone together online has also started to become popular again amongst families and friends. I remember a few years ago when Skype was becoming mainstream some of us tried it as an experiment. For example, when I was in South Africa on sabbatical I had a Skype dinner with a friend back in the UK. It was nice to catch up with her while doing something but the eating part actually felt quite odd. We had both served up ourselves something simple – a pasta dish – and started eating about the same time. But somehow picking up our knives and forks together did not synchronize and the eating of the meal did not feel natural. The smells, tastes and noises when eating together were lost in translation.

Unlike the craze for ASMR where someone uploads a YouTube video of themselves making eating noises when eating jelly beans, cake or other delight that makes viewers go crazy when listening to them. The acronym stands for ‘autonomous sensory meridian response’ which apparently causes a tingling sensation in someone akin to the hairs on the back of their neck standing up. Zach Choi, who has over 7 million followers, does a great impression scoffing fast food – might be compuslive viewing for those who are missing their junk food fix now that McDonalds, Nandos and the like are all closed.

Apparently, there is a huge following for ASMR; over 15 million videos have been made and watched endlessly. It is not just the chewing, munching and crunching noises that appeal but also lots of other mundane noises that trigger that weird sensation in people – including the sound of rolling marbles on a hard surface, someone whispering ever so softly or tapping their nails gently on a desk. The mind boggles.

I have watched a few of the ASMR videos and I am afraid they don’t do it for me it; if anything they do the opposite, making me judder and cringe. I like the straight forward things in life like the clinking of glasses. At the end of a tiring day of back-to-back remote work meetings I now look forward to a FaceTime chat with a friend or two with a glass of wine in hand. Of course, it is no substitute for the real thing but it can be surprisingly relaxing and enjoyable. We make sure we have a good laugh, crack some jokes and try to see the funny side of life. And then its dinner, Netflix, and the 10.00 o’clock news before going to bed.

Another Groundhog Day in these strange times.