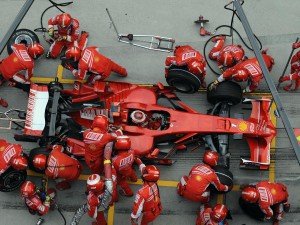 Part of my dream fellowship is to open my eyes to new possibilities. So when I was invited by my host Gary and his friend Andrew to watch the Chinese Grand Prix with them last Sunday evening, I accepted without reservation. I’ve never had any real interest in Formula 1 before, except listening to the occasional news snippet about Jenson Button winning or Michael Schumacher returning after his retirement. Andrew and Gary, on the other hand, are both hooked on it – and have been since growing up with it – following every race and anticipating what will happen at the next one. During the race, like millions of others worldwide, they enter the F1 zone, gripped by the fate and fortune of the drivers, as the breathtaking action unfolds.

G gave me a little booklet about this season’s teams and drivers, as we were waiting for A to arrive, so I could at least become familiarized with the basics. As I flicked through the pages of handsome chaps and cars, he patiently answered a few of my rookie questions about which team Jenson and Lewis were in, what the sponsor names were of all the teams, how much it cost each year for them to take part and so on. I then found myself looking at a page of tyres and noticed there were six kinds, all lined up in a row with different coloured lines around them, reminding me of licorice allsorts. They are used for different conditions and stages of the race. There are 4 dry-weather ones: super soft (red), soft (yellow), medium (white) and hard (silver) and two wet-weather ones, which have different treads on them, an intermediate and a full-on heavy rain one. The treads help to expel the water on the track when racing in the rain. Apparently, the patterns of the wet tyre treads are mathematically designed to ‘scrub’ the maximum amount of water from the racing track surface in order to get the best possible contact of the tyre and to prevent aqua-planning.

The tyres, I quickly discovered, play a central part in the race but can be highly variable, all of which adds to the excitement. Gary filled me in on more fascinating factoids and I found myself gripped by tyre talk. Geeky or what? All the cars have to use the same Pirelli ones now so there is no unfair advantage. But the drivers have to use both soft and hard during the race and a key team decision is choosing which one to start with. The skill and luck is in selecting the right one at the right time. Use the soft ones first and you could loose ground. Use the hard ones first and you might burn out too quickly.

Instead of air the tyres are filled with nitrogen – this helps them to keep their shape when they get very hot as the cars zip round the circuit and also helps to keep their pressure just so. However, the downside of driving at extremely fast speeds for nearly two hours is that the tyres wear out quickly. Bits of rubber start to ping off the tyres, especially when the drivers are cornering, and trails of rubber debris can be seen accumulating all around the track. These tyre shreds are affectionately known as ‘marbles’. How cute is that? 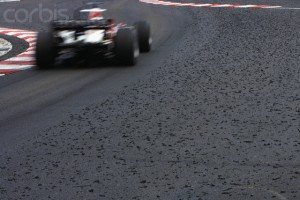 Eventually, the tyres, if continually driven at very fast speeds, will blow or lock. They are designed to last for a maximum of 200 km and so the drivers have to make at least 2 pit stops to change them. Each pit stop obviously takes them out of the race temporarily and so at best, adds 20-30 seconds to their time. The longer they keep driving the tyres the more they keep in the race, but the less grip they have, and the more risk that they will lock or blow. Cut your loses early on and you could gain later on. But it depends on where you are relative to the other drivers, as to the pros and cons. The juggle is whether to change 2 or 3 times, early or late, soft or hard. Each involves different risks and pay-offs. There lies the thrill, deciding which one and when.

We settled in front of the big TV screen and the flag went up. Vroom vroom. The boys got straight into it, watching and commenting on the race, seeing things I didn’t even notice, such as which driver was in front, behind, in the middle, who had just overtaken whom, whether they were in the DRS zone where they can really accelerate, and so on. It was all a bit of a blur for me. Their eyes were on split second detail and mine were on the gestalt. But gradually, I started to see things a little more clearly and by the end of the race, I almost kept up with G and A’s octane talk as the race for second place hotted up. I even piped in a squeak or two – noticing one or two minor details.

The most fascinating part of the race for me was the pit stop. It seems that a race can be won and lost in the pits. Each team has to time their driver’s pit stops strategically to the moment, to try to ensure they minimize lost time on the track while maximizing the opportunities to overtake the cars in front using fresh tyres. It is a time when men and machines have to work in close unison, to perform a “precisely timed, millimetre perfect choreography”. You can’t but marvel at the team’s highly focused attention that ideally takes place during a 2-3 second window when all 4 tyres are switched in sync. 3 mechanics look after each wheel: the first takes off the single nut with an airgun, the second removes the tyre, and the third replaces it with a new tyre and then the first places the nut back on again and then tightens it up, using the airgun.

I watched my first pit stop tyre change in awe. Grown men, in lurid green and white jumpsuits sprung into action: machines pounding, wheels vanishing and arms flapping. I was not sure where to look at first as so much was going on. After watching a few more, I trained my eyes to focus on the action around one wheel and then glance momentarily at the other ends of the car and finally on the moves of the lollipop man (!) stationed at the front of the car. The affectionately called lollipop man refers to the shape of the long sign he holds in front of the car to signal to the driver where to stop and when to start. Just like the marbles – another, sweet naming touch. Men can be boys, too.

Clearly, there is a lot more going on during a pit stop than one pair of eyes can see. Awareness of what each is doing in fast motion is key. One slight fumbling and you blow it for the whole team and millions of dollars literally fly out the window. This happened early on to Michael Schumacher when we were watching the race in Shanghai. One poor soul hadn’t screwed the nut back on properly before the lollipop man had moved his shield, signaling to Michael to accelerate. The mechanic waved his hand somewhat limply to signal all was not well but he knew by then, it was too late. Michael had vanished in a roaring puff back onto the track, all the while his left front wheel wobbling. Too late…Within 5 seconds the race was over for him. Such a tiny margin for error is what makes the race so exhilerating for us, but as G and A noted, it was likely to be the end of the road for the poor sod whose nerves got the better of him when fumbling with the airgun.

I have just been reading Negative Camber’s blog where he describes the pit stops in NASCAR racing as being like ballet. I could not agree more. But unlike the 2-3 stops in F1 they have upwards of 8 to 10 stops and sometimes even more. And it is not just the tyres they change but a whole host of other things, including “making chassis adjustments, others servicing the driver, and so on.” This ‘full service’ take 13-16 seconds rather than the 2-4 seconds for the quick service in F1. Now I know what I should have been watching during my wilderness years living in the american mid-west. And to think one of my female colleagues at Indiana University was really into it and we pooh-poohed her. Luckily, there are many more F1 races to go, next sunday it’s Bahrain.