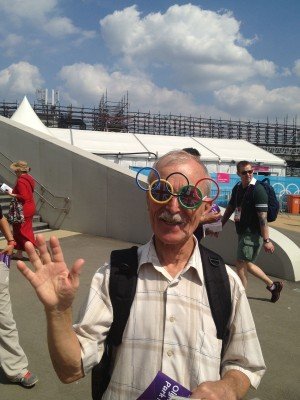 During the Olympics, London was full of people being smiley, friendly and kindly. Strangers talked to one other on the trains, in queues and while sitting at the same table, drinking, eating and being merry. The hordes of volunteers in their bright pink and purple clothing chivied the masses along, promulgating a joie de vivre, whether they were commuter, tourist or Games ticket holder. It was all terribly infectious and warm-hearted. People joined in and everyone commented on what a lovely place London was to be – the complete opposite of the expected chaos, unpleasantness and congestion stress that had been predicted beforehand. Those who had chosen to escape the city had missed out on something special.

Last week I was the recipient of a random act of kindness. It really made my day as I was so not expecting it. I was on my way home, via Bilbao, after being at a conference in Vitoria, and had decided to visit the Guggenheim Museum for a couple of hours before catching my plane. My taxi driver dropped me off as near as he could to the stunning Frank Gehry building; I trundled off towards the shimmering facade, wheeling my suitcase with one hand and carrying my shoulder bag and handbag in the other. Suddenly the drizzling rain we had experienced in the taxi turned into power-shower sheet rain. It was very dramatic and I stopped momentarily to wonder why the Gods had chosen this very moment to open the skies and pour forth. Not having any hands free I was unable to do up my coat so just carried on walking slowly, feeling the cold water pelting my head and face. 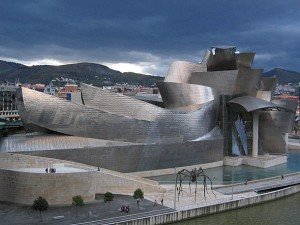 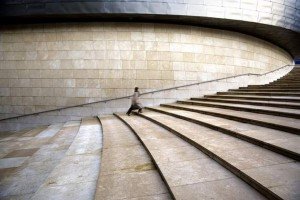 The entrance to the Guggenheim is not obvious and I paused again to see where to go. A long set of marble steps led down to a small group of people standing waiting. I assumed that was the entrance. I braced myself and picked up my suitcase. By this time I was beginning to wish I’d gone straight to the airport. But just at that point a woman came to my rescue; she stood beside me and placed her huge umbrella over both our heads. I looked surprised at first, but quickly switched to beaming, and we descended down the steps together. In her excellent English she told me where to go to leave my luggage and coat and as we walked through the doors, she wished me well and we parted. I smiled profusely at her and thought about what she had done and wondered how many other people would have done the same. I hope I would. 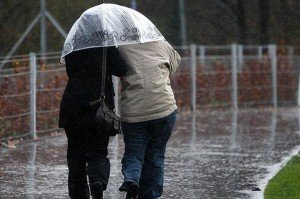 I tried to remember the last time I randomly acted in a kind way for someone else. I guess there are various degrees of kindness we can choose to make at unexpected moments, such as opening a door for someone or picking up their dropped glove and handing it back to them. The one that came to my mind – which had given me immense pleasure – was recently outside my local Co-op store when coming home from work. Most evenings, a lone man stands nearby trying to sell his Big Issue magazines. He is softly spoken and does not bother you or look at you in the way some beggars make you skirt around them. I often give him whatever change I have in my purse. I don’t know why but this time I asked him, “how much do you need?”

He replied “just another six pounds to get me a bed at the hostel.”

I didn’t think about what he might do with six pounds or whether he was telling the truth. I simply opened my purse and took out a crisp ten-pound note. As I handed it over to him his eyes lit up like Christmas tree lights. He took it and then kissed my hand gently, whispering, “thank you, love.”

Whilst I was writing this piece the doorbell rang. I opened the front door to see the window cleaner standing there, all dark-eyed and hungry-looking. He asked if I could pay him for the last ‘clean’. I indeed did, but I also gave him a big Christmas Box – not quite a random act but nevertheless a very kind one. I don’t know if it is still the custom to tip postmen, dustmen, cleaners, etc., at Christmas, but it can make all the difference to those who have to work outdoors, are lowly paid and have to brave the elements. Call me a big softy but these people have it tough.

There are lots of quotes from famous people about acts of kindness but one that stands out for me is by William Wordsworth in his poem Tintern Abbey: “The best portion of a good man’s life is his little, nameless, unremembered acts of kindness and of love.”