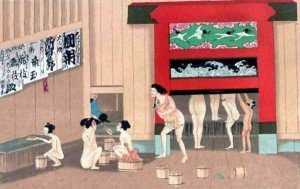 One of the delights of going to a foreign country is discovering the different ways of doing things in all manners, from greeting someone to sharing a meal. Japan, for example, where I am currently visiting is full of them; often mindboggling for those of us from western cultures not familair with such habits. It makes us have to rethink what are normally taken for granted habits, ranging from taking our shoes off when entering someone’s house, to never taking a dripping umbrella inside a shop, to not blowing your nose in front of someone else. It all makes perfect sense when you think about the reasons behind these etiquettes and, of course, is far more civilized than not doing them. But, inevitably one slips up and does the wrong thing, like I did today, big time.

The hotel I am staying at in Japan, in the city of Nara, has a bath house – which I was curious to try. Called a Sento, in japanese, it translates into cleanliness plus nakedness plus togetherness. The japanese bathing culture started centuries ago, coming orginally from India, as a communal place for both sexes to get scrubbed cleaned while gossiping – just like what happens in Turkish Baths. Nowadays, many have closed, while most others survive on tourists paying good money to experience something that they simply dont have in western culture.

Being a good citizen, I looked at the folder in my room containing the directory of services but for the entry against bath house, it just mentioned the opening hours. So I thought I better read up on the etiquette of public bathing, especially given that I was going by myself. So, I checked it up on the web and was quite surprised to see so many rules associated with the tradition of communual bathing. What drew my attention were two key rules which could easily cause problems for prude and brash brits: (i) no-one is allowed in wearing a swimming costume and, (ii) no-one is allowed in bearing a tattoo – the reason being is that tattoos are associated with symbols from the Japanese mafia. I stopped reading up about it after this – assuming there would be a receptionist at the desk to show foreign guests the ropes (as I had recently experienced when visiting, for the first time, a Turkish Bath in Istanbul a few weeks ao).

I went down to the bath house on the 6th floor in my hotel flip-flops holding my hotel towel, eager to find out more. However, no-one was around to tell me what to do at the front desk so I walked into the ladies changing room, where I saw a japanese lady drying her hair. I stripped off and wrapped myself in my bath towel, thinking that was what I should do. I then asked the japanese lady (who rightly spoke no english) in a kind of improvised janglese, flappy arm sort of way, where the entrance was. She pointed to a sliding door and then started waving her small wet towel at me, gesticulating and rabbiting on in animated japanese. Google Translate would have come in handy then – but maybe not when standing naked. So, instead, I waved my large towel and she laughed mirthfully at me. This cross-purpose banter went on for some time with neither of us getting anywhere. Then she pointed to my wrist – I showed her my orange wristband locker key and that got a nod of approval from her. At least I got that right! Then I grinned inanely, as you do when you reach a lost in translation impasse, and slid the door into the bath house. I was confronted with female nudity which took me aback. A few women were merrily showering and lathering themselves, each holding a handheld shower and sat squately on a feeble plastic stool in front of their own mirror. I felt far too self conscious to try doing the same. Instead, I put my large bath towel to one side and plunged straight into the large communal hot bath. I sat there by myself feeling like a lemon, wondering if I should have showered first. There was no one for me to follow in their footsteps or to give me a helping hand. Eventually, some of the japanese women who had been cleaning themselves followed me into the bath but sat at the other end.

At that point, I realized I had messed up big time. Got it the wrong way round. So I stood up and walked straight out, without looking back, to the changing rooms – wondering what the women sitting in the bath were thinking about me. Luckily, the hair-drying woman had disappeared. I then saw a sign saying restroom and thought I could hide in there to rest, overcome my embarrassment and decide what to do next, but on sliding the door open discovered it was just a toilet (it seems they use the American term here for toilets). At which point I wanted to sink into the ground. I hurriedly put my clothes back on and rushed out, back to my room. 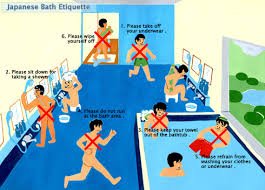 On re-reading the dos and donts of going to a Japanese bath house, back in the safety of my own room, it turns out that having a little towel is really important, and you should never use a big bath towel when there. I was reminded of the divers at the Olympics who all have their little flannel towels they wring and use all the time to dry bits of them while focusing the mind. So, that was what the hair-drying woman was trying to explain to me. Then I discovered the other faux pas I had made:
Not washing all over beforehand but instead brazenly walking straight into the bath: “Wash thoroughly before entering the relaxation baths. It is important that every square inch of skin gets a pre-soak lashing of the suds. Typically, one squats centimeters above the ground under small showers with the backside resting on a miniature stool. Don’t worry, it is more comfortable than it sounds – even if the knees have seen better days. Instead of allowing water to run over yourself as you clean considered wasteful in Japan – pour water over your body with a shallow plastic bucket provided by the sento.”

This time I read on. I could have done worse! Apparently, they do use a chemical in the water that turns it purple if you pee in it. But not only the water it also turns your skin purple. Could you imagine if I had turned up at my talk scheduled for tomorrow all purple and the Japanese members of the audience chuckling to themselves, knowing the reason. I cringed imagining how that might have played out! Professor Purple found in the bathroom with lead piping…

For more on Bath House rules.