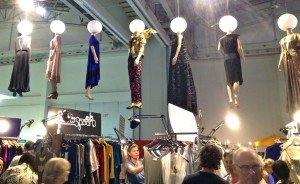 Design Indaba is a big exhibition held every year in Cape Town showing the best of South African design. This year, over 300 designers, from architects to coke tin sculptors, gathered for the weekend to show off their homemade wares, exhibiting an amazing diversity of skills. Jewellery, fashion, ceramics, furniture, décor, craft, candles, toys, lamps, knick-knacks and much more; everywhere you looked was an abundance of vintage and modern, sustainable and forward- thinking design. Now in its 9th year, the organizers claim in their brochure “that creativity can create livelihoods, transform communities and contribute to the country’s economy.” Judging by the thronging crowds at the event, it would seem all is well and thriving. 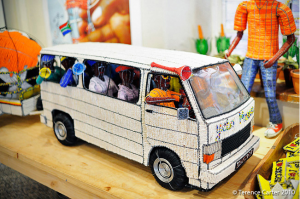 What struck me most was the reworking and repurposing of stuff. There were seats made of champagne corks, lampshades made of crocheted wool, marmite jars made of beads, and flowers made of recycled tin. I love it when an artifact makes you look twice. It seemed that one entrepreneurial lady had turned the art of beading into a must have artform. All the cool pieces on her stall, including household groceries and VW camper vans had red dots on their price tags. Snapped up by shrewd buyers. And as Sabelo, a local bead artist points out: “In our culture, beads tell stories about who people are, how old they are. The amount of beads you wear indicates your age, and the older you are, the more you’re respected because of the wisdom you have”. I like that idea but I like more the way these bead designers had intricately woven their beaded washing powder box and custard tins to be precise facsimilies. 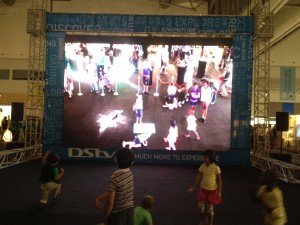 In the middle of the hall, was a very large public electronic display, which projected a live video of the audience standing in front of it, mainly children. They seemed totally engrossed with their mirror image, dancing, waving and gesturing at themselves. At first it seemed just like a live feed from a video camera focused on them from above the screen. However, after a few moments of looking, I suddenly noticed animated cartoon characters appearing from nowhere onto the screen and then, after a few seconds of performing, disappearing. First a dolphin splashed around, then a spaceman floated by, then a leopard prowled by and then some larger than life dinosaurs waltzed on. I was reminded of the early 90s Smirnoff vodka ads, when an innocent cat turns into a panther as the camera panned across the glass bottle. Likewise, there was something seamless and surreal about the way the animated animals mingled with the virtual kids and the real kids played with the virtual animals.

The company that makes this interactive public display – Live Augmented Reality – has paired up with National Geographic. The set up now tours in public settings, such as shopping malls and Expos, and is a wonderful crowd stopper.

The kids happily joined in the make-believe, squealing with delight as the dolphin jumped and splashed around them. One 5 year-old boy, who was quite a dancer, started moving his hand as if to stroke the leopard, as it appeared to brush besides him – even though it was high up on the screen and he a few feet away from it standing on the floor. He was perfectly positioned to make it appear as if he really was touching it. The merging was a magical design. 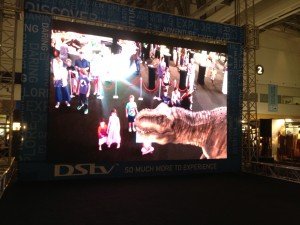 The finale was a storm – lashings of animated rain, lightening and thunder descended upon the children. They loved holding their arms up to feel the virtual raindrops splashing on them and clapping their ears as the thunder boomed.

I watched the little dancing boy for a while; he was completely engrossed, repeating his slinky repertoire of dancing, stroking and cowering, as the short cycle of augmented cameo characters, returned again and again. The augmented reality illusion, created by the public display technology was a big hit with Cape Towners. Whilst self-conscious fashion models pranced the catwalk and famous chefs constructively talked the creative walk, the kids hyper-played – without an ounce of self-consciousness.