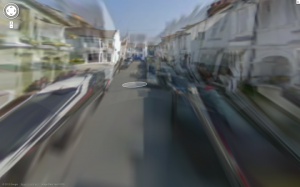 The diversity of tools Google keeps churning out each year to help you search, check out and be nosey is mind-blowing. My early favourites were Google earth, Google image, and Google scholar. But recently I have been enjoying Google street view.

Like a lot of people, I love typing in a place I have lived in or visited before and letting Google transport me back there; then taking control to click and zoom through at street level looking at familiar places, houses and the cars parked outside them. Google street view displays stitched together images taken from a fleet of cars that have poles stuck on them with nine directional cameras. 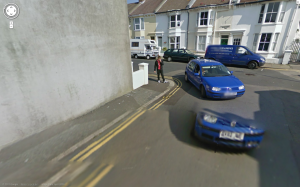 While creating effective facsimilie 3D worlds, the roving medusa heads can sometimes throw up a few unexpected and quirky images. The front of a car can sometimes appear again in front of the whole car like a forward shadow. There was a craze last year, to collect funny, morbid or bizarre images that should not have been there, such as nude people, cyclists accidentally knocked over by other cars and pedestrians appearing twice but in different parts of the pavement of the same street.

The Montreal-based artist, Jon Rafman, collects screen captures of the never intended for public consumption incidents that have somehow slipped through Google’s screening software. The result is his ongoing series The Nine Eyes of Google Street View, part of which will be shown at the Saatchi Gallery later this month. There is something dreamy about many of the ones he has chosen to show on his website. No doubt we will be in for a treat when the show opens. 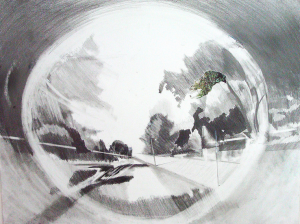 But in my mind, a far more creative use of Google street view to make art is Rafael’s appropriation which he stumbled upon during his forays and experimentations. To begin, he gets himself in the zone and comfortable with a glass of wine at hand and some good music playing in the background. Then he starts picking places in the US Midwest he knows, checking out the objects and detail in the neighbourhood or scenery. The technique involves a series of follow the street view arrow, create the circle and zoom to it. His trick is to capture part of this movement in interesting and distorted ways by using the combination of shift command and 3 keys. Then he collects a whole set of these and puts them on a flash drive, drives to Kinkos to get good quality prints made up of them. Then he looks at them and selects parts that he thinks will come together well. Then he draws a collage of a place made up of different perspectives and shapes. The one above is his drawing inspired by several images he screen captured in street view Bloomington, which he is familiar with both physically and digitally. It took me right back to the core of the Midwest experience. Menacing clouds in big skies matched by brooding big trees and melancholic bushes that grew in front of you on deserted wide streets where nothing much else happened. Nature’s force and a lack of human nature.

I had a go myself at capturing and distorting my street and although a bit tricky at first, quickly got the hang of it. I could understand the joy of his technique. The screen capturing pan over the digital terrain reminded me of using water colours, where part of the thrill is in not knowing quite what the paint will do and where it will go. 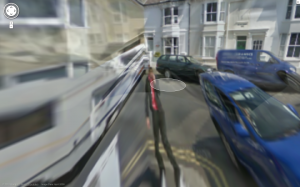 Last week when I was in the US, however, I got a little freaked out by Google. I was doing some research on people and noticed how the page of search results was full of images – typing in someone’s name can show immediately an annotated profile, with image, date of birth, place of school and whatever else. I know this stuff is readily available on Facebook, Wikipedia, LinkedIn, 123, Google scholar, image etc, but Google search now brings it all together for instant viewing as a digital footprint. I don’t know why it surprised me – maybe it was the immediacy of getting so much personal information about someone all on one page just by typing a few letters of their name. Here in the UK (google.co.uk), we don’t have that facility yet. I am sure it wont be long, but you can see what it looks like by using the Google Chrome browser and typing in google.com/ncr.