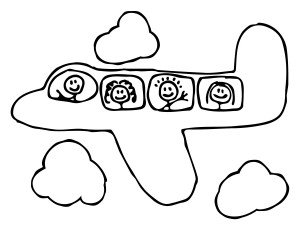 I’ve just returned from an epic journey, travelling from Austin, Texas to Cape Town. We left about 3.00p.m Thursday and arrived back home at 9.00a.m Saturday. It involved long periods in airport lounges, and two whole nights stuck on planes, where many hours were spent sleeping next to and talking with complete strangers. During such times, one is forced to endure considerable discomfort but one can also entertain other possibilities. I often wonder which way I will turn: will I stay locked in a digital media bubble, watching endless videos on the headrest of the person in front, or will I start talking to my fellow passenger. The decision can be fickle.

My first night in the skies was on an American Airlines 767 flight from Dallas to London, in economy class. It was literally a case of sardines in a vacuum tin. Shortly after squeezing into our seats I got talking with my Texan neighbour, who was tattooed from head to foot. I’ve always been intrigued by those who go the whole hog and so somewhat brashly asked him about his tattoos. He told me he had been painting his body from the age of 17 and had finished his complete bodywork, a couple of years ago, in his early 40s. Not an inch of his exposed skin was left un-inked – except his face – but he’d made up for sparing that part by covering all his extremities, including feet, toes, soles, fingers and palms. I asked him how it felt now he no longer had the joy of thinking about what and where next to have a new tattoo. He just stared sideways at me with droopy eyes and a big moustache twitching slightly. Then in a measured Texas drool simply said that he was very content now that he had completed his whole body and that instead what he enjoyed was tattooing other people’s bodies with their latest designs and whims.

His tattoos, I am afraid to say, were not very striking or beautiful, except for a big colourful mallard duck on his neck – which was kind of cute. He told me he had a thing about ducks and that he had more of them on other parts of his body. At that point I had this terrible urge to go “quack quack” and could feel the words coming up through my larynx, but thankfully was able to swallow them (where do such childish impulses come from?). The rest of his designs were the usual medley of symbols, scantily dressed women, names of significant family members and other stuff meaningful to him, all mingled together in a way that only real ‘tat’ aficionados can fathom out.

I carried on asking him silly questions, such as what was the most difficult, painful, coloured… He answered me patiently and I began to feel a bit like a phoney Louis Theroux. But there was absolutely no sign of chemistry or connectedness between us – or attempt at reciprocation. The only time he lit up was when he started telling me how he dreads getting on planes that have a 6 in the middle of them. The 767 we were on in his classification, was truly ancient, offering only a bank of 3 pink-tinted shared screens miles ahead of us on the wall for our entertainment system. It made him almost chuckle that we were stuck on a clapped out piece of junk.

Eventually, he tired of regaling his tat stories and fell silent. I, too, tired of tat details. We both then fell asleep within inches of one another. I always find that very strange to be so close to someone locked in an activity that is normally so private and where one is so vulnerable to the other.

When we were both abruptly woken by the bright lights being switched on from above, we remained in our own bubble and did not acknowledge each other’s presence again. I find that also strange, as waking up next to someone in the morning is normally such an intimate thing. Instead we both stared blankly at the plane icon flying over the shuddering map of Britain in the distance, until it hit the outskirts of Heathrow.

We did not even say goodbye or look at each other as we stood up and disembarked. So very different from my encounter with Fabio Capello, a couple of years ago, when I could not stop jabbering for the whole duration of the flight. 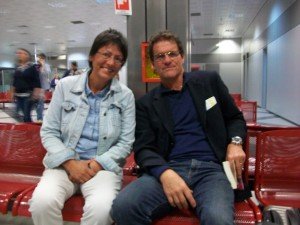 The next guy I sat next to en route to Cape Town from London could not have been more different – a very friendly Afrikan guy who was in his mid 50s, very outdoorsy and extremely proud of his sons. This time, he initiated the conversation, by asking me questions about where I had been, what I was doing in South Africa and the usual polite chit-chat stuff. I reciprocated in my questions, and he told me how wonderful his country was, etc. It was a very agreeable conversation. He seemed such a content and positive chap, telling me all about his passion for fishing, hunting and hiking in the deserts of deepest Africa.

But then out of the blue, he started telling me about how he and his family had been robbed by a gang of six black men, who had entered their house one evening, armed with knifes. His story of what happened next was scary and gruesome. His voice changed and he stared ahead. His son had left a door open within their compound to let his new puppy go walk about. The gang had been watching for a while and pounced on the momentary slip-up. The gang went straight for the jugular, taking all his guns and then his wife’s worldly goods.

He then said very softly that his family all had counseling afterwards. And how his son still suffers. And now how his home is like Fort Knox. Scarred and scared for life. Then it was time for lights out and the eye patch on.

Next morning he asked me how well I had slept. The ensuing conversation was very polite and pleasant. Then as the plane began to disembark we shook hands, said our farewells and exchanged business cards.

One of my lasting memories of South Africa is how kind, interested and gentle the people are who live here. 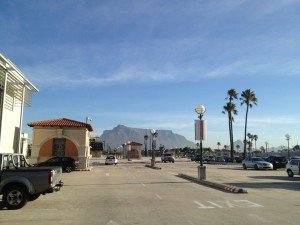 The cartoon image at the top is from Cindy’s blog which provides a list of annoying things you can do on a boring plane ride. The photo on the left I took from a shopping mall car park north of Cape Town. You see Table Mountain popping up everywhere but sometims it pops up in the most unlikely places. I particularly liked this juxtaposition as the backdrop to an urban landscape.