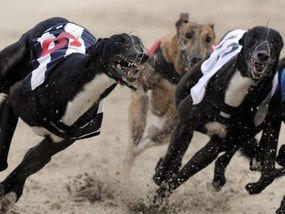 R and I went to Brighton and Hove’s Greyhound Stadium last night to experience the entertainment and excitement of watching greyhound dogs charge around the racecourse at top neck speed. I’ve not been for a long time but remember vividly the adrenalin rush of winning a few pounds on a 50 pence bet.

The first thing I noticed that was different was the technology. The woman at the turnstile explained that we needed to tap in our car number plate on the touch screen just inside as the shared car park with the Co-op store only allows for 2 hours parking. After that you get a parking ticket. But if you use their system you are exempt. Slick body-sized, walk-up kiosks awaited us. The punters all knew what to do and tapped their numbers in. I pondered over how the system worked; did the tapped in number plates stream onto the parking attendants’ mobile devices and did they scan all the number plates in the car park to match them up? It turns out it is all automated. The company who created the system uses Automatic Number Plate Recognition (ANPR) to monitor a car’s movements in the car park that then enables them to enforce parking fines to vehicle owners who exceed the two hours limit and who have not tapped in their number plates. They also provide detailed statistics of who visits each week. Big data, big brother? Slightly worrying, I thought.

But the biggest dilemma for us was the multitude of decisions we had to make, from where to sit, what to bet on and how to bet. To begin, we did not know whether to go upstairs or downstairs, sit near the bar or in the café, stay inside or stand outside. How do you decide what is a good spot to be in if you have not been before or for a long time? Should we watch it from above or at the side, digitally on a TV screen or for real? We scouted around and finally sat down at an empty table near the bar and close to a bank of Tote betting desks.

The next decision was who to bet on. We opened the scorecard booklets they had provided us with. R was anxious to know how it all worked. I bluffed my way to begin with and then fessed up to not really knowing what it was all about. We discovered there are many dimensions to measure a dog up against. R wanted to understand the logic, science and probabilities. I wanted to know what colour the dogs’ coats were, the name of the owners, and whether their names had a good sound to them. 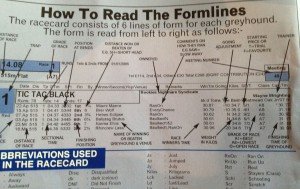 We tried to read the small print on the Formlines. There are six lines of form; first is the length of the race (ours were all the standard 515 metres), then six lines showing how each dog has done over the last 6 races – how many runs, sectional time, position at bends, finishing position, distance won or beaten by, name of winning or beaten greyhound and venue, the name of the winners, the race winner’s time, comments on how they ran, race winner’s time, weight in kilos, going adjustment, trainer, grade of race, finishing time, whether a favourite or a trial and starting price. What a lot of facts to consider and then try to understand how they all interacted with each other. There was no way we could fathom out the influence of all of these on who was most likely to win – and yet millions do study the form week in week out before placing their bets. 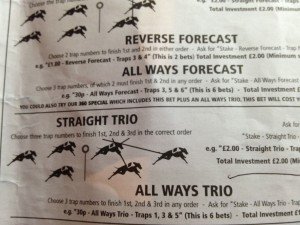 Then you need to understand all the different kinds of bets you can place. To help us, on the second page is a guide to betting on the tote, showing 9 different ways, from a straight win to an ‘all ways trio’ (choose 3 numbers to finish 1st, 2nd or 3rd in any order). The easiest was placing a bet to win but the others sounded more enticing. Could you predict which of the 6 dogs would come in 1st, 2nd and 3rd, based on systematically running through all those stats and working it out? There were 10 races scheduled throughout the evening, the first at 19.30, the second at 19.46 and so on at regular intervals. So much to do.

R concocted his own mathematical formula that needed some computation. So I dug out my iPhone for him to use the calculator on. I was not sure what he was doing but it involved averaging one of the columns of numbers by another. I, in the meantime, tried to work out which kind of bet we should go for. In the end, I chose the most risky one with the chance of highest returns – the ‘straight trio’. Sounded like a nice name for a cocktail. R went for the safer ‘all ways trio.’ We then went over to the tote counter and gave the numbers of the traps the dogs we wanted to win and placed our bets.

We took off with our £1 bet tickets and went outside to the racetrack. It was quite empty so we got some great seats just near the finishing line and began soaking up the atmosphere. In front of us was a group of lads dressed up like the Blues Brothers, with the exception of one chap who was to be the groom, dressed in a wig, frilly ripped flowery dress and a L plate on his back. It was fun to watch them jostling. Next to them, stood a gaggle of young girls, towering and tottering on ridiculously high-healed stilettos. One confident blond who stood out from the rest was wearing a sausage-tight, white ‘t-skirt’ with spray-tanned long legs and arms sprouting out. I could not stop looking at her self-conscious body hovering in the evening light. She really was made up. I’d have placed my bet on her winning her race.

The first set of dogs then appeared with their owners and were paraded in front of us. I liked the one in the orange coat best and thought perhaps we should be betting on our gut instinct of what the dogs looked like rather than on their form. Some were nervous, frisky, curious, jumpy, others sleepy, timid and quiet; a few even stopped to have a poo – much to the amusement of the crowd.

R’s first heuristic did not work and my high-risk strategy also failed – but it was exhilarating to watch your nominated dogs and cheer their trap numbers. “Come on 5, come on 3, yes, yes…” Then we fell silent as we saw our numbered coats slip behind the rest.

After loosing again in the next two races we changed our strategy. Instead, we looked at the consistency of the dogs’ finishing times for the last six races. We also chose the single safe bet ‘to win’ rather than the first three dog permutation. I also prioritized my choice on the sound of the dog’s names. Our new tactic worked for race 4! A greyhound that looked a nice shade of grey and wore a white coat, called Pablos Antics came flying in (we chose the name because R is half Spanish).

The next race I had that willed feeling one can have when being superstitious. I just knew my dog would win. I chose one called Tidy Trouble. 5 of its last 6 finishing times were on the 30 seconds mark (making it consistent). I liked the name because I used to live in Tidy Street in Brighton and I liked the sound of it when conjoined with Trouble. Instead of going to the Tote windows I went to the men who stand by chalkboards next to the track and placed a fiver on him. The man who took my money looked me in the eye and said ‘here comes trouble’.

R chose Greycotte Grace – a name that did not do much for me but the stats did it for him. As the dogs were paraded in front of us we watched our respective dogs and commented on their demeanor. Mine was small, grey and sleepy. R’s was large, mottled and jumpy; more interested in sniffing the other dogs and people. Not a good omen for either of us. Still when the fluffy hare came racing around for the dogs to chase we could not help but get excited, cheering our dogs on to win. Mine was first out of the trap and kept its place right to the end. R’s never left 5th spot. But just as the dogs hurtled to the finishing line, number 5 caught up. It was a photo finish and we waited nervously for the crackling tannoy system to call out the number. When I heard ‘trap 1’, I leapt up for joy. Tidy Trouble had done it. I also had not realized that not only was Tidy Trouble an outsider but the odds were very favourable at 5/1. No-one else had given him a chance since he’d finished either last or second from last in his last six races. And to cap it, at the bottom of the page, the form guide had pointedly summed up the poor dog’s demise, “made to retrial after a heavy defeat, been in decline for a while now.” Luckily, I never saw that before I had made my decision.

The feeling of winning gives you a rush. I raced down to the front where the man said to me again ‘here comes trouble’ and handed me thirty quid. I grinned inanely. 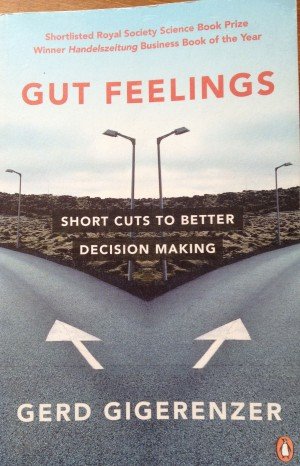 Making a choice on gut feelings and one or two heuristics seems a good strategy. This idea has also become increasingly popular in contemporary psychological theorizing on decision-making. For example, Gerd Gigerenzer’s recent book ‘Gut Feelings’ talks about how relying on one or two fast and frugal rules of thumb rather than exhaustively weighing up all possible reasons is often a far more effective way of making a decision. The fewer dimensions one considers the less one is overwhelmed when making a choice. Finding or seeing the salient information that satisfies one or two core heuristics (in my case consistency of running time and the sound of the dog’s name) can be faster, more satisfying and less cognitively demanding, provided one takes the outcome – winning or losing – with a pinch of salt.

We left the greyhound stadium on a high and got home just in time to watch Team GB at the Olympic Stadium win a few more gold medals – the heroes of the night were Mo Farah, Jessica Ennis and Greg Rutherford. Tom Fordyce, the chief sports writer, for the Guardian captured the specialness, “there was a point in the Olympic Stadium on Saturday evening, at about 9.20pm, when you wanted to put the world on pause and just revel in it all for a moment before the next wonderful thing caught you round the chops.”

And just as well we left after my wonderful moment because my winning formula would have failed me in the next race – Vigorous Cheryl (a good Canadian friend of mine is called Cheryl) would have been my bet but she came in 5th. Gambling is so much about intuition, luck and superstition.