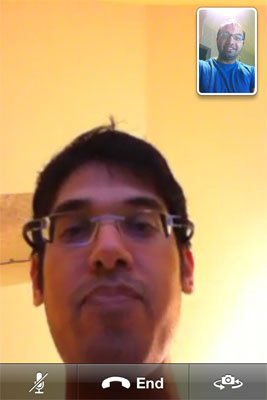 The other day, I accidentally touched a part of my address book on my phone screen and it started calling a friend on WhatsApp. I knew it was starting to connect by its distinct soft pulsing ‘dudududu’ sound. I panicked and tried to find the cancel button but it was not obvious where it was. Eventually the app hung up on me but my friend later texted me to ask what was up. I texted back saying nothing really.

My initial anxiety was triggered by the thought that had my friend answered my accidental WhatsApp call I would find it hard to fess up to saying I had not meant to call her. I’d have to bluff and start a conversation as if I had meant to call her. The awkwardness is akin to bumping into someone out of context, such as at the supermarket. It can be embarrassing as you are not prepared for the encounter and don’t know what to say. You often overcompensate, by over-smiling and blathering inane things.

My WhatsApp quotidian blip got me thinking about how talking to someone’s digital face when it appears on your smartphone is far more intrusive than just speaking to them on a phone. To begin, when the person answers your call, their digital image immediately faces you. It can be abrupt. Of course this happens when we meet in the flesh. But somehow it feels strange doing it digitally. When orienting yourself to your phone screen you are also checking how you look to them in the overlaid ‘mirror’ window. Are you squarely framed or distorted with an up the nose view? All while making an initial greeting and engaging in small talk.

It is not surprising that more and more people nowadays prefer to talk to each other via typing text messages or using messenger apps. Besides being easy, fun and less effortful, it can be more face-saving than having to face someone in a digital moment.

And yet in the world of work, holding meetings with others scattered around the globe, via Skype, Zoom, Meeting Owl and so on, has become the norm. These videoconferencing apps work best when everyone at the virtual meeting is remotely connected from different locations (providing the wifi connection is good). To indicate who has the floor, screen effects are often used, such as enlarging the person who is talking to take up most of the screen or highlighting their portal when they take the floor. The quality of the video in high end videoconferencing suites is also mightily impressive, making it possible for people to appear uncannily life-like. The effect can be to make remote people appear more present by projecting their body movements, actions, voice, and facial expressions to the other location.

However, when only one person is remote and the rest are physically present at a meeting it works less well. Not so long ago, when there were no trains running from my neck of the woods into London, I worked at home and arranged to have lots of Skype meetings for the regular face-to-face ones already scheduled. They went OK but I often felt detached and alienated from the others who were there at the meeting. It was quite hard work following the twists and turns of the conversations. Not helped by the fact that I could only see those who were sitting in front of the laptop camera and hence had to deduce those who were not visible whenever they spoke from the tone of their voice. The softly spoken and mutterers were the hardest to discern. I also felt awkward when butting in, and made an exaggerated waving gesture to get the other meeting attendees’ attention to be let into the physical conversation. When brochures and other papers brought only to the meeting were handed around I sat there rather helpless, unable to grab copies. As the conversations jumped around with much laughter in between I realized how much I was not there and the little impact, if any, I had on matters being discussed. At the end of the meeting, everyone broke into their little groups to continue or start a new conversation. I made a pathetic wave and then clicked my close button. I became only too aware that I was very much on my own back in my house. Far too abrupt an ending. 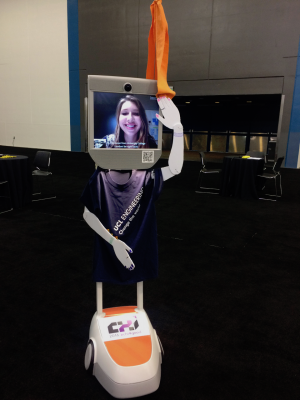 To provide an individual with more sense of presence at meetings, a new breed of telepresence robots have been developed. They are intended to enable people to attend meetings and other events, like conferences, through controlling a roaming physical robot from their home via their laptop. They are typically about five-feet tall, have a display at the top that shows the remote person’s head, and a base at the bottom holding wheels that enable the robot to move forwards, backwards, or turn around. The robots also contain a microphone and speakers to let the remote person be heard and to hear what is being said locally. Instead of sitting in front of a laptop display at home that shows only a fixed view of the others at the physical meeting place, they can move their robot while looking around the place through controlling the cameras’ eyes – that are placed on the robot.

One of my PhD students teleported to a conference in the USA using one of these robots and found it overall an enriching experience. However, at other times she found it rather challenging. For example, she couldn’t see how she appeared to others at the conference so did not know what they thought about her. She also said how she could not gauge the volume of her voice, and on one occasion accidentally set the volume control to be at its highest setting. When speaking to someone, she did not realize how loud she was until another person across the room told her that she was yelling. The person she was talking to was too polite to tell her to lower her voice. 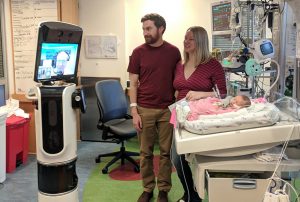 Telepresence robots are now being introduced into hospitals to allow clinicians to visit patients at their beside from their offices where they have access to more data, information and equipment. An example is Dr Bear Bot who has been used at the Children’s National Hospital in the US. Once, when it appeared at the bedside of a young child, the child looked at the robot and asked the physician how he had gotten inside it. Now that is a presence of mind. The doctor however did not play along with him and instead was rather prosaic in his answer, simply saying he was not really in the robot. Better to keep the magic in mind.