Since the pandemic turned our world inside out most of us have been sat for hours on end each day in front of a display (phone, tablet, laptop or PC) interacting with all manner of virtual talking heads. We have gotten used to this way of connecting with our colleagues as the new normal – even joking about still wearing our pyjamas as no-one can see our lower half while on screen. We have also developed a new norm – turning our cameras and mikes on and off when coming in and out of focus during meetings. We don’t do this in the real world but we all do it now in the digital world. It is easier and less stressful to not be visibly present when not talking. Then there is the abrupt ending to our meetings, clicking on the ‘leave meeting’ button transports us back to our home life in an instant. 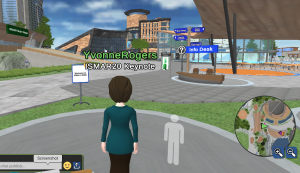 Today, I gave a keynote at a virtual conference called ISMAR20 that is about mixed and augmented reality. I have given a few invited talks now during lockdown. They are quite different in the extent to which I feel connected with the audience. Some totally detached and others more engaged. Today’s talk was more the latter. The organizers had asked me to record my talk beforehand so that I could be more relaxed during the session and also to reduce the risk of too many technical hiccups overshadowing the talk. The conference setting was a 3D virtual world; that was designed to be like a futuristic virtual campus, comprising lifelike campus buildings and luscious outdoor spaces (the actual conference was meant to have been held in Recife, Brazil).

It has been a long time since I have properly set foot in a 3D world. It required me becoming an avatar and controlling it with my keyboard as if just behind. I had a few attempts to get used to using my keyboard to move around. It is easy to move too fast and walk into or through a wall. A nice touch they had added was ‘clippy-cloppy’ noises as I walked. It almost made it feel I was walking in stilettos. For my appearance, I selected some clothing from a virtual wardrobe, dressing myself up for the occasion. I donned a blouse, skirt and jacket in contrasting colours. Instead of wearing a badge, my name appeared automatically above my head in a halo cloud that followed me around, making it easy for others to see who I was at a distance. Then I was ready to enter centre stage.

There was a lot of tech involved to switch between and to turn on and off at the right time – that needed practice. It seems virtual A/V is just as tricky to get right life as is physical A/V – if not more so. But we got there. Then when it was time for my talk I stood by the virtual podium facing the audience and my pre-recorded talk appeared on a large display behind me. It meant I could not see my slides as I ‘talked’. So, I popped up my slides on my laptop back home and listened to myself rabbiting on in the virtual space. All very strange. Sometimes I had an out of body experience.

After my video ended, I ‘walked’ my avatar to stand besides another screen, clicked on it and there I was again, only this time, as a larger than life video feed fielding the audience questions, which the chair asked me via his avatar. At that point, there were too many of ‘me’. It made almost for an existential crisis, especially when the audio started reverberating. But I managed to cope – as you do – and answered the questions without too much waffling. 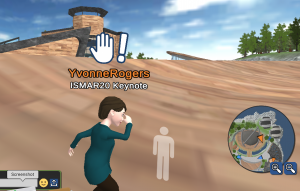 Then as I walked off the stage, I was not sure what to do with myself (there was no-one to go for coffee with) so I tried out some of the other avatar actions (like dancing, waving, clapping). Doing the samba was fun and reminded me of Theresa May’s entrance when she danced to Abba’s ‘Dancing Queen’ at the Tory party conference in 2018.  But mine was as an exit to an empty space rather than as an entrance to a rousing crowd. Given the world is so topsy turvey right now  it seems apt to dance off stage than on to it. And then in a flash it was all over; I clicked the ‘quit menu option and walked to Tescos down the road to get a sandwich.