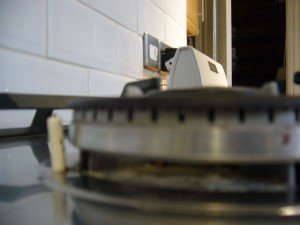 The doorbell rang and two gentle giants appeared at the front door (both 6 foot 2): Paul and Mozzy. I’d texted them earlier to come and fix a dimmer switch that had broken. But then it occurred to me as they came in that I could ask them to fix another problem which the hob had developed the night before.

The bit that lights the gas had got stuck in the middle ring and was clicking incessantly like a cicada, flickering its tip manically. I tried in vain to bend it, push it, twist it – but no joy. The cicada would not go away. So I ended up switching the hob off at the socket to keep it quiet. It is one thing to be lying by a pool in Tuscany listening to them fazing in and out of the heat; another to have them in a permanent catatonic state in the confines of one’s kitchen.

But how could I get the guys to do two jobs when I had called them to fix only one? We all know how they hate being asked to do more and will raise their hands at the mere mention of another faulty light switch – saying they have too many other jobs to go to after yours. So I thought just maybe if I was very chummy with them they might find it hard to say no.

But they beat me at my own game and were even more chummy with me. They were bowled over by the house the moment they walked in, commenting on the gorgeous floorboards and the high ceilings so I nodded knowingly and gave them a grand tour of the rest of the house. That did the trick. As we cornered into the kitchen I slowed down and stopped opportunistically by the hob and asked: “Would you mind having a quick look at this.” The “Ah, but” started to form in Giant 1’s throat but I looked at him and he melted, and said instead “Arrr, OK.” So I switched the cicada back on and he looked for a second at the controls, then removed the top off the one furthest to the left, took his pliers out, twiddled about with the bit underneath and then turned the gas on. Magic. No more clicking. He’d zapped the cicada.

I was mightily impressed and asked him how he knew which of the five possible knobs to go for and what to do once he’d prized the top off. He said he could just see the one on the left was slightly lower than the others. I couldn’t see it until he pointed it out. That was what had caused the cicada on the central ring to think it was on heat. The control for the front ring had got stuck causing the middle one to go mental.

After that me and the two giants got on swimmingly well. And of course they fixed the dimmer switch.

So the electrician saw the hob console as a pattern of shapes and deviations. The prof just heard noisy clicks. Guru Don would love that.