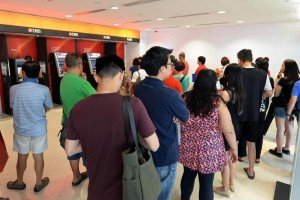 Every Thursday a bustling Farmer’s Market comes to our university campus. It is a feast for the eyes and nostrils. Giant pans of steaming paella, sizzling burgers and other culinary delights await the throngs of students and staff coming out of their classes and offices for an al fresco lunch. In an adjacent street you can also see a line of snaking people queuing to draw cash out of the ATMs. The reason being is that the stall owners only accept cash while most young people now don’t carry cash. They pay for everything from coffee to clothes to travel with a tap or a swipe of their contactless or debit cards. It is all so easy. No need to carry around loose change – unless that is you need to go to the toilet at a train station. Then you come a cropper.

I asked my students the other day how many of them had any cash on them. One or two hesitantly put their hand up. Cash is old money to them. The smell and feel of a wad of crisp £20 notes fresh from an ATM does not have the same feeling as it did to previous generations. But there is a price to pay for all this convenience. It can come as a shock when they look at their online bank statement or spending app and find out just how much they spent that week.

You can often end up spending much more than you thought. The odd coffee here, snack there, bus to get home, and other sundries can quickly add up to a startling amount. It is definitely a case of the sum being greater than the parts. Claer Barrett from ft.com wrote an article about how she discovered she was using her contactless card far more than in the same month a year ago. In her words a whopping 211%. This August, she tapped her card 22 times – mostly for coffees, sandwiches, public transport, supermarkets, pubs, Uber taxis, and so on. A year before she had used it less than 10 times while drawing out cash 10 times – amounting to £600. This year, for the same month, she found she had drawn out much less cash and used the ATM much less frequently – only 4 times, for a total of £220. And what’s more, when she forced herself to go back to the old way of mainly using cash, she discovered she spent much less each week. 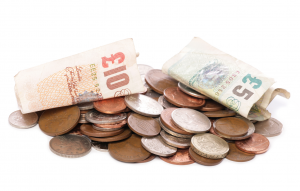 People used to check how much money they had left in their purse, pocket or wallet before making their next purchase. It provided a way of helping them know how much they had spent, how much they had left and whether they could afford to buy the next thing. “Lend us a tenner” was a common phrase at the end of a jolly night down the pub. Now you never hear it. Students dont have the same experience of what it feels like to have an empty pocket or only a few pennies left. Just add a few more transactions to their ever increasing overdrafts. If you can pay for another round or a kebab and a taxi home, then why not? If the bank stops their virtual cash flow then send a text to mum or dad to ask them to transfer more money into their account. It is all too easy living in the cashless society. But worryingly, reckless.

“Money, it’s a crime
Share it fairly but don’t take a slice of my pie
Money, so they say
Is the root of all evil today…”