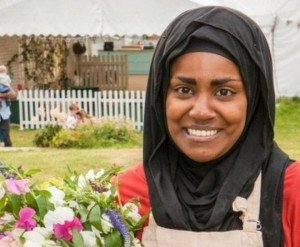 I couldn’t help overhearing the conversation between two ladies, in their eighties, sitting at the next table to me at Costa Coffee as I was trying to do some marking. It was much more riveting than the printed words in front of me. One was regaling to the other her immense pleasure at watching the last episode of the Great British Bake-off. The other had not watched it but listened intensly.

Her friend was waxing lyrical in a loud voice about the programme. Her opening gambit was saying how a lovely Muslim woman had won it:

“She was a typical Muslim woman – very timid. You know. But then as the show went on she really blossomed. I thought how wonderful. You don’t see that, do you? Oh and her husband was a real hunk. Got his own fan club now. Not surprised. Lovely couple…”

Her friend nodded with interest.

“Must come from a really good British family. On the last day at the tea party her mum and dad were so excited for her. And her husband thinks the world of her. I have never seen such a lovely couple. Gorgeous. Don’t see that in a Muslim family. He gave her so much encouragement. He was so proud of her… It brought tears to my eyes.”

The star of the show, Nadiya, is a Bangladeshi mother of three, aged 30. She and her husband have shown what a truly multi-cultural society we are in the UK, slicing through all the stereotypes about what it means to be a Muslim in Britain. The same conversation I just heard, is being repeated up and down the country, in its myriad of coffee shops and echoed throughout social media – in the aftermath of the competition. There have been hundreds of thousands of tweets about her victory – all in the same vein. Just a few have dared to say she only won it because she was a Muslim. Which of course is absolute rubbish. And has been counter-argued by the likes of Pritha Bardhan, who tweeted, “She won the Great British Bake Off because she’s able – not because she’s a Muslim woman. Her soda can cake and choco peacock were amazing.”

Nadiya’s showstopper in the final was to bake a British wedding cake for the one her and her husband never had at their wedding. It was a lemon drizzle cake (a classic British favorite) draped in some of the jewelry she wore at her wedding and wrapped with some of her sari dress. She joined her britishness with her culture. Perfect fusion.

A striking factoid about what it means to be British is that more people watched The Great British Bake Off final than voted for the Conservative Party in the last general election in the UK. Well over 14 million viewers watched it live (while many more watched it later on iPlayer). That speaks volumes.