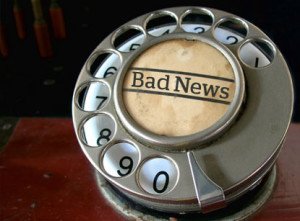 There is never a good way to receive bad news. We all dread the scenario of the doctor telling you the results of scans and tests that indicate you have terminal cancer or the policeman knocking on your front door to tell you your child had been run over. Conversely, there is never an easy way to tell bad news. Policemen and doctors receive special training. The rest of us, not. Increasingly, people resort to using email or a text to pass on bad news. You can compose an email or text in the best way possible, using opening gambits and well-worded condolences, and then simply hit the send button – not having to deal with the immediate reaction of the person it is sent to. Some tweet the bad news or post on Facebook without thinking whether the bereaved have been informed personally. That is really bad.

At the end of last year I was working on my laptop, having just landed in California the day before, when an email notification appeared at the top of the screen with the subject matter “bad news i’m afraid.” I stopped in my tracks and my heart beat a little faster. It was the addition of ‘I’m afraid’ that made me afraid. I opened up the email thinking it was from Gary, the email address of the person sending it to me. But his wife, Gil, had used his email account to let me know he had died out of the blue: “i have terrible news and there is no easy way to tell you: Gary died this afternoon of suspected heart attack on the beach.”

She had a point that there is no easy way to tell terrible news. But it completely threw me that it came from his email account. I read it as if he was talking to me – as you do when you read emails from people you know. Someone I had thought was talking to me appeared for a split second to be sending me news of his own death. I understood later why Gil had sent the email from his account – it was far easier and more practical for her to let all his many friends know in this way as she just had to go through his email address book. The shock to her was so great that it did not matter which email account it came from – so long as we found out personally and not first through Facebook.

Besides death, another kind of bad news that can be hard to receive via email is disappointment. Typically it happens, when you fail at something – such as not getting the job you wanted, not being awarded a grant proposal you had worked hard at, not getting a paper accepted for publication at a conference when it was one of your best, coming second in a competition you thought you deserved to win, and so on. Often you have aimed high, imagining and daydreaming about what it would be like to succeed. But then the email letter arrives and you read the first line, “I regret to inform you…” that stains your retinas. The rest is a blur and you experience that awful sinking feeling. I usually swear profusely under my breath, say childish things about the sender of the email, kick the desk and then go for a walk to try to distance myself from the indelible words in the email. And then come up with any number of post hoc reasons for why I did not want the job or the grant and why I am better off without it.

Another kind of bad news is at the group, organizational or national level – that triggers anger and frustration. For example, England’s abysmal performance at the World Cup last summer, Man United’s dreadful start to the Premiership this season or the political party you supported loosing at the general election. A common strategy is to blame – “we was robbed”, “the ref was blind” etc. Another is to assume you know better and to spell out how you should have done this or that. It can help to dissipate the disappointment by feeling superior or more knowledgeable.

Last week my dean dropped a bombshell to a number of us in a largely positive email sent to various members of a list. While reading all the good news the bad news – otherwise largely hidden– popped its ugly head out for those who would be affected by it. We were told of the plan to move the Computer Science department to a new building (the good news). But following this was the sentence that for the next couple of years the majority of us were to be ‘decanted’ to another building, temporarily, while a new building was found and repurposed for us (we’ve grown too big for our current accommodation). I got really upset at how I had received this piece of news. I know I can be over-sensitive, but somehow receiving it in this way made it all the worse. I let my dean know how I felt in a frank email reply just to him. He made up for it by meeting me face to face talking it through over lunch and coffee. It is good to talk – it really is.