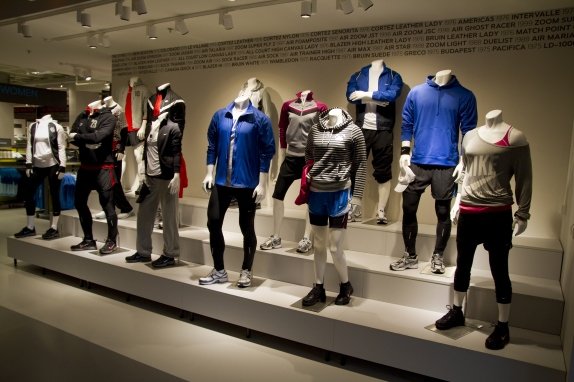 Nike’s online and bricks and mortar stores have always been at the leading edge of technological innovation. They have experimented with new cinematic, media user experiences; pioneered customer design, and encouraged users to creatively personalize their own pair of trainers through selecting from a digital palette of options.

We entered their new physical store in the sparkling, mega-shopping mall, Westfield East in the heart of Stratford City, with anticipation. The spacious, two-story, store did not disappoint. It was immaculately dressed – not just the windows but throughout the interior. We were immediately confronted by a cast of larger-than-life, headless male mannequins; clad in tight, white Nike underwear and GB football tops. They were very sexy-looking, triggering a primordial urge to kick a bulging football. The clever marketing people had lined up many brightly, coloured ones in the vicinity.

Further back in the store, we spotted more headless mannequin models, but this time female, wearing top-to-toe black gear with shocking-pink, running shoes.

They make me want to run very fast.

The sports gear for sale was hanging on dinky things or neatly piled on back-lit surfaces that made you want to touch, hold and wear it. I am not a Nike fan – it would be a bit like mutton dressed as lamb – but after a few minutes of enjoying the eyewear candy, was easily able to see a younger version of myself encased in the latest tick logo, techno-coloured attire. It was all, too, seductive. I commented to one of my companions what a contrast it was from the jumble sale piles that are now commonplace in the cheap and cheerful ‘made in China’ labeled high street shops.

As my eyes continued hoovering the clothing spread, I was surprised by the lack of any TV or other digital screens. We’d noticed how in every other shop there are multiple vivid, large screens embedded in the walls – attracting and luring passers-by with swaggering, pouting beauties. Nike seems to have gone retro: letting its tops, bottoms and shoes walk the talk.

Having feasted on the first floor, we rode up the steep yellow-lit escalator for dessert. Our by now, large-pupil-ed eyes were drawn to an enormous cloud of bright orange shoe boxes, hanging at different heights over the edge of the escalator – they glowed in semi-darkness, giving you a warm feeling.

I eventually turned around, and at last spotted two tiny touch screens, discreetly placed on a back wall, next to a modest-sized flat screen, that flashed up images of Nike running gear. A direct feed from their website; blurring clicks and mortar. We walked up to them and behaved like toddlers; finger-tipping the screen, assuming it was us that were cycling through the images of watches, runners and visualizations.

Out of the blue, a human being appeared besides us, wearing a big badge saying ‘Athlete Michael’. It seemed as if he had just transmogrified from our screens, clad in the latest Nike running gear – black tights, baggy shorts, pyro-technic trainers and an assortment of layered, lurid tunics and vests. We all stared at him, fixated by his badge, wondering if he was really real and who he was. He began by patiently explaining how nearly every Nike running shoe now has a chip in it and when Blue-toothed to a wristwatch transforms the running experience. This unlikely combo has become a huge success among joggers and runners over the years; enabling them to see on the go how many calories they are burning, number of steps taken, and, with the deluxe-iPod GPS combo – even the route taken, when they are slowing down or speeding up, how much sweat they are dripping, etc.

Athlete Michael got into his stride, as we cooed and nodded, marveling at Nike. He liked the wristwatch best because he can see at a glance how many x’s he is doing and how it is really easy to download this onto the Nike running website and see how his x’s are faring compared with the rest of the world’s Nike joggers.

For some reason, I was reminded of the TV commercial for UK’s Directory Enquiries service 118 118, that features men parodying different sports gear costumes to the Ghostbuster’s tune.

Rather than walking away Niked, I was left with an irritating ditty repeating itself in my head. Maybe a big video screen might have worked better on me.