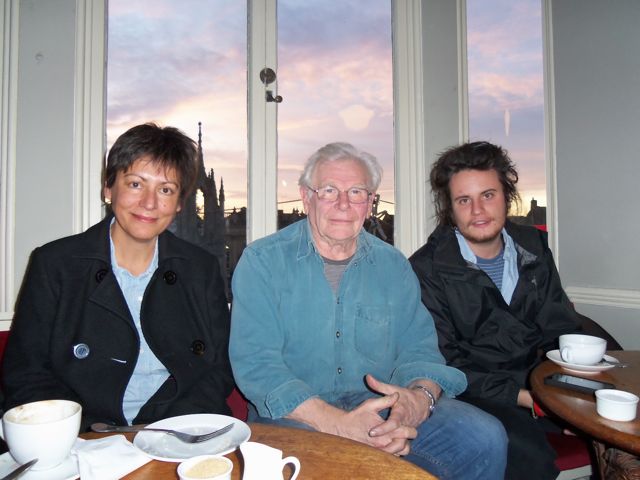 Meeting an artist for the first time in his studio is an exciting prospect. But how does one spark up a conversation, without sounding trite, too earnest or too much in awe?

I was invited by John Wragg RA to visit him, after I had bought a painting of his from the Royal Academy summer show. I decided to take him up on his offer and was accompanied by Rafi and his girlfriend, Amanda, who were over from the States visiting me. We set off in high spirits, driving to Devizes, a market town in the beautiful Wiltshire countryside. We pondered over my predicament; I asked both of them if they could think of an intelligent question – they being fine arts students. They did not see it as a problem.

We’d been talking, too, about the artfully compiled new book by Martin Gayford, ‘A Bigger Message, conversations with David Hockney’; reflecting on his portrayal of Hockney’s love of nature, how he had changed the way he painted and communicated this following his discovery of the iPhone/iPad app, Brushes, and his ‘voracious intellectual curiosity’.

Our host turned out to be very welcoming and made us feel at ease, making us a cup of builder’s tea and pouring us a glass of red wine, each (except he was so animated that he forgot to pour himself one!). My earlier trepidation was soon replaced by reverence. The conversation flowed from him; he told us anecdote after anecdote, interspersed with his views and opinions about life and the art world. We sat in his kitchen, switching between sips of tea and red wine, listening intently and laughing loudly. Surrounding us were a selection of his paintings, sculptures and personal artefacts. It was a strange experience to be trying to take them in – almost surreptitiously – while following the many threads of the conversation.

The questions I had thought about never materialized. Instead, I asked him more about his life. It just seemed more natural to talk so. We discovered he hung out with Hockney when he was 17 – they both being from Yorkshire and of the same age – and so knew him well. What a coincidence, we all chimed. But then he chortled, pointedly,

‘He is a millionaire and I just make ends meet’.

He then told us a funny story about why Hockney had dyed his hair blond and his journey to California. Several times he talked about Tracey E. And about how he had taught Anish K a few things at Chelsea. And now look at them both…

As time passed, it became more strange to actually talk about JW’s paintings and what was behind them. I suppose it is the same in my own field of academic work. One skirts around, for fear of making someone feel vulnerable or asking crass questions. And yet one knows the other craves recognition and the opportunity to talk more about their ideas. Often someone gives a great talk, goes for dinner with people who were at the talk, and after a few platitudes they all talk about anything but the talk.

After about an hour of kitchen talk, we went on a grand tour of JW’s idiosyncratic house, never knowing quite what to expect. We were led from one room to the next, happening upon different periods of his life and work. Secret doors led to hidden rooms full of paintings, photos, sculptures, cuttings, and artefacts – lying, standing or hanging in front of us, in measured and thoughtful ways. So much to take in – it made it  more difficult for me to ask about any of them.

A and R, however, were bolder, asking a few questions about his technique of using hardboard versus canvas, oil paints versus watercolours, and so on. And then I stopped in front of a big painting, depicting a forlorn, egg-headed chap – and asked him – in a rather tongue-in-cheek way, why he had painted over the top of the man’s head (he often paints over and over until it feels right),

‘Just because.’ He looked bemused at such a silly question. Right answer.

That stopped me in my tracks.

Artful conversation lies in the layering and folding of topics, rather than directness of questions and answers. We found out a lot more about JW and his art through his seguing of anecdotes, memories and quips. In contrast, the conversations MG has with DH in the Hockney book are more focussed and reflective, like mini-interviews, more befitting of a book.

At one point in chapter 6, MG asks about the enjoyment of art. DH reminisces by describing his memories of sitting at the front of buses and in the front of cars, so he could see more, ‘because it is such a pleasure.’

But it was his anecdote about GIs in Vietnam that is most striking and will stick with us. He describes how the soldiers used to talk about ‘eye-fucks’,

‘when they are on the move they have to keep their eyes intensely looking for a tiny quiver of a leaf, over there or over there, taking in as much as they could.’

‘it is a way of saying the eye is having extreme enjoyment.’

As we wandered around JW’s collection, that extended into the café across the road (where we had coffee and cakes) our eyes were doing the same, but our ears were also having ‘ear-fucks’ – so to speak – with the enraptured conversation.